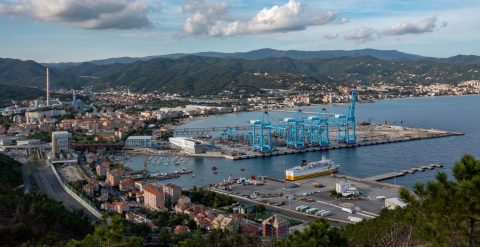 From a zucchini field to a vanguard rail terminal: Vado Getaway in Genoa

The Port of Vado Ligure, near Genoa, is expanding its terminal Vado Getaway to boost rail freight transportation. RailFreight.com interviewed two engineers from the Port Authority for the Western Ligurian Sea, the entity that oversees the port. Susanna Pelizza, Director of the Maritime, Civil Engineering, and Rail Works Sector, and Annalisa Delfino, Head of the Rail Works Office provided some valuable information on the future of the port.

The Port of Vado Ligure is one of four basins that form the Ports of Genoa system. It is the most important port in the Mediterranean when it comes to the transportation of fruit, so much so that, over the last 25 years, it earned the nickname of Chiquita. The port also offers facilities for unloading petroleum products. Moreover, it is the first semi-automated port in Italy with a fully-automated gate and stacking yard.

The Vado Getaway terminal was launched in 2019 by the Port Authority. When Rete Ferroviaria Italiana (FS) took over the area in 2010, the unused rail tracks had turned into a wild zucchini field. Twelve years later, the terminal is ready to become a 25,000-square-meters architectural work of art.

As the engineers mentioned, expanding the rail terminal in the Port of Vado Ligure is quite a task. One of the main issues is space: the conformation of the Liguria region, which has a longer and thinner shape, does not leave much room for mastodontic projects. However, the Port Authority for the Western Ligurian Sea, which is in charge of the Ports of Genoa, found a way to upgrade the terminal to make it as functional as possible in relation to its geographical position.

A two-phase project with an eye on the environment

The new project for strengthening the terminal is divided into two phases. The first phase, which included the replacement of the signaling system, has already been completed. As the engineers mentioned, the old system now earned the right to rest in a museum. In fact, it will be transported to the National Railway Museum of Pietrarsa, near Naples.

The second phase of the project will revolve around the adaptation to the standards set by the EU, namely the electrification of the line and the construction of a fourth track. Moreover, the port has planned an ingenious way to handle 750-meter-long trains. As the engineers highlighted, the new track will only be 550 meters long. Longer trains will be therefore assembled through maneuvring operations.

During the second phase, over 130,000 cubic meters will be dug into the hill overhanging the terminal to create some additional room for the terminal expansion. The preparatory works, including the creation of new customs areas and investigations for the excavations, will start in September and are expected to take roughly two years. Most of the materials that will be dug out will be reused for projects in the area surrounding the port, making it a perfect example of circular economy. The only exception is made for plants and trees which will be disposed of in dumpsters.