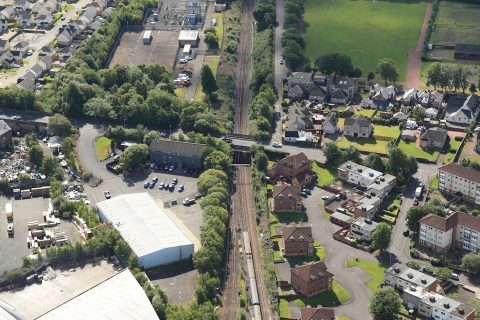 In the scheme of UK railway infrastructure works, a project cost of 2.2 million pounds (2.65 million euros) will hardly reach the top of the spending charts. However, for return on investment, the remodelling of Whifflet South Junction in Central Scotland may well be the summer’s big hit. Now commissioned, the work will ease access from two adjacent terminals and one nearby port and smooth passage for anglo-Scottish intermodal services on the entire network.

Network Rail say their engineers worked around-the-clock over to complete an upgrade to what they call, without overemphasis, “a vital junction at the heart of Scotland’s rail network.” Whifflet South Junction, located between Coatbridge Freight Terminal, and the Mossend International Railfreight Park, near Motherwell on the West Coast Mainline, has been upgraded for the first time since its installation over fifty years ago.

Due to the project’s complexity, the railway between Coatbridge and Motherwell has been closed during the works. That’s no small undertaking, on the biggest urban transit network in Britain, outside London. It’s also the busiest freight location overall in Scotland, with traffic routing through the two adjacent freight terminals and the recently enhanced rail freight facilities at Grangemouth port on the River Forth.

Passengers were treated to the inevitable rail replacement bus services, while freight operators faced diversions around the complex local network, which can mean lengthy detours, depending on the intended destination. Work to renew the junction saw outdated jointed rail, timber sleepers and worn-out ballast replaced with a strengthened track, concrete sleepers, and fresh stone.

Decades of carrying heavy freight trains have taken their toll on the busy junction which, just for good measure, carries the West Coast Main Line, Europe’s busiest mixed traffic route. This upgrade is designed to increase reliability and reduce the maintenance required on the track and signalling equipment. “The 2.2 million pounds investment in renewing Whifflet South Junction is vital to keeping freight services flowing between Mossend and Coatbridge Freight Terminals and the rest of Scotland’s Railway”, said Eddie McLoone, Network Rail Project Manager for Scotland’s Railway. “We would like to reassure freight customers and rail passengers that every effort has been made to reduce the impact of our activities as much as possible. Thank you for your understanding.”

The Scottish government’s recently appointed transport secretary, Jenny Gilruth, has been out on the network inspecting works around the country. “We want a rail infrastructure for Scotland that helps cut emissions, provides sustainable transport for people and freight and provides fair work and highly skilled employment opportunities. “Moving freight [by rail] will ultimately lead to the removal of many more vehicles from the roads in Scotland.”