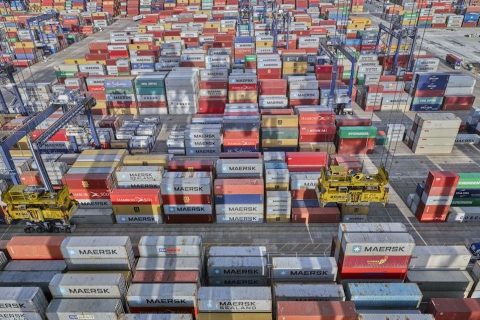 UK container traffic back online as Felixstowe returns to work

The impact of the industrial dispute at the Port of Felixstowe should not be underestimated, and rail freight is in the eye of the storm. As the first strike at the port in three decades comes to an end, fully half of all the container traffic in the UK gets back online. The eight-day stoppage at the port has done nothing to ease the congestion on the quayside.

With around seventy-five intermodal train movements on a typical working day, the stoppage at Felixstowe has been felt around the country. Every terminal of note has direct contact with the east coast port. The walkout, by almost 2,000 members of the Unite trades union, ended with a return to work yesterday morning (Tuesday, 30 August). However, with forward orders already in transit, it may already have repercussions that will be felt beyond Christmas. As yet, there is no resolution to the dispute over pay.

The contribution that rail freight makes

There is no underestimating the contribution that rail freight makes to trade operations at the port. It was only earlier this year that Felixstowe was heralding the scheduling of the thirty-eighth daily intermodal service from the port. That level of operations, if kept up daily, could account for fully twenty per cent of all container traffic at the port.

Britain’s biggest and busiest container port handles more than four million TEUs annually and berths around 2,000 ships each year, including the largest container vessels afloat. It was the destination port of the Ever Given, the 20000TEU capacity container ship, which ran aground in the Suez Canal in March of 2021, causing lasting disruption to the global supply chain. For context, Felixstowe handles that many containers every two days.

“Felixstowe plays a pivotal role in keeping the UK’s trade moving”, says a Felixstowe statement. “The port regrets the impact this action will have on UK supply chains. We are grateful for the support we have had from our customers and are working with them to mitigate disruption. The port provides secure and well-paid employment, and there will be no winners from this unnecessary industrial action.”

The company’s stance is in stark difference from the views of the union. Unite, though, is in no doubt that the action is damaging to rail freight operators. “Strike action will have a huge effect on the UK’s supply chain, including the logistics and haulage sectors, and will also cause severe disruption to international maritime trade”, they say.

The dispute has been frustrating for rail freight operators, almost all of whom have a commitment to traffic at Felixstowe. “Strike action will cause huge disruption and generate massive shockwaves throughout the UK’s supply chain”, said Bobby Morton, Unite national officer for docks. “This dispute is entirely of the company’s own making. It has had every opportunity to make our members a fair offer but has chosen not to do so. Felixstowe needs to stop prevaricating and make a pay offer which meets our members’ expectations.”

The only mitigation, and a blessing in disguise, is that planned rail engineering works went ahead unaffected. Routes out of the port, favoured by rail freight operators, were due for attention over the public holiday weekend. Work also continued around Ely, where extensive works are planned to ease freight movements.

The dispute remains unresolved, and further action is threatened, but no further strikes have yet been announced.