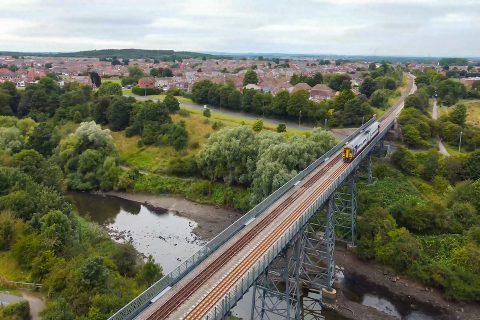 Work to bring the freight only Northumberland Line back into mixed use has moved ahead during the late summer public holiday. UK infrastructure agency Network Rail has been working to upgrade the neglected line to bring it up to passenger standards. Currently the line serves the port of Blyth, north of Newcastle and carries a modest load of bulk traffic, including alumina trains to Scotland.

The Northumberland line will edge closer to running passenger trains once more as a result of key infrastructure works, particularly bridge refurbishment and replacements. Possessions over the August BAnk Holiday allowed Network Rail to remove and replace a railway bridge near Sharnford Close, Backworth with a more modern, seamless structure will boost reliability for freight trains now, and make it possible for passenger trains to run in the future.

Between Thursday 25 and Tuesday 30 August, engineers laid nearly 200 metres of new track and improve earthworks on the line. The project is part of a multi-million-pound Restoring Your Railways scheme to reintroduce a regular rail passenger service between Ashington and Newcastle by 2024. It is sixty years after the line was closed to passengers during the rationalisation known as the Beeching Axe – a reference to the appointed commissioner, businessman Richard Beeching.

When complete, communities in towns on the line, including Ashington, Blyth and Newsham will be reconnected to Newcastle and the national network at large. The regenerative scheme will also open up opportunities for economic growth, tourism, and support the ambitions of offshore gas and oil sectors to engage more fully with rail freight for their transport needs.

The eight-mile (13km) project is expected to help promote economic regeneration in the area, which lost its indigenous coal mining industries in the 1980s. “We’re making some fantastic progress on this unique, economically important scheme to offer a new, reliable rail service for communities in the north east”, said Luke Durston, Senior Sponsor for Network Rail. “Over the bank holiday [we upgraded] a vital section of this route, one step closer to restoring passenger services for the first time in a generation.”

Earlier this year the Department for Transport provided 34 million pounds (41 million euro) towards detailed design and preparatory works. The collateral benefits of the project will include providing additional capacity for East Coast Main Line movements in the Newcastle and Northumberland region. The project should come on stream for passengers at about the same time as the metro service in Newcastle commissions its new light rail fleet. Ironically, Beeching, who threatened the line with closure, was seconded from the chemical industry. ironically, the line was saved from complete closer by alumina flows between Blyth and Scotland.