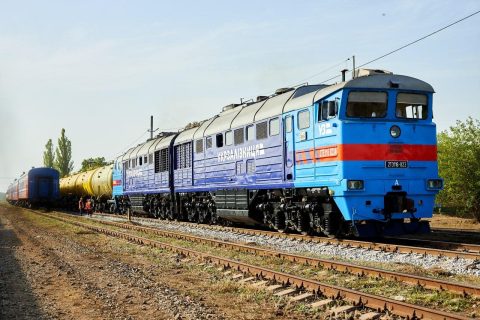 A rail link between Ukraine and Moldova, closed since 1999, has been reopened, as President Volodymyr Zelenskiy said in a video address on Monday. The line is 22-km long and connects Berezyne in Western Ukraine to Basarabeasca in Southern Moldova. The rail section will offer a valid alternative route from the port of Odessa to the Black Sea.

“We expect that we will be able to achieve an average freight volume in this area at 10 million tons per year,” the Ukrainian Ministry of Infrastructure, Oleksandr Kubrakov said in a Facebook post. “The restoration of this route has become vital in the background of the constant attacks of the bridge across the Dniester Estuary by Russian occupants,” Kubrakov claimed.

Ukraine’s plan: unlock the grain and join the EU

It is not clear yet what kind of goods will be involved with the rail route. However, Ukraine is looking for new ways to export millions of tonnes of grain that have been blocked by Russia’s invasion. To this end, according to Reuters, Turkey and the United Nations signed a deal with Russia and Ukraine to ship grain from Odessa and other Ukrainian ports.

The reopening of the Berezyne-Basarabeasca line may represent a further step for Ukraine to enter the European Union. “Our joint projects are not only about transport, cargo, and passengers. We are moving together towards EU membership, so together we are building a common European infrastructure,” Kubrakov pointed out.