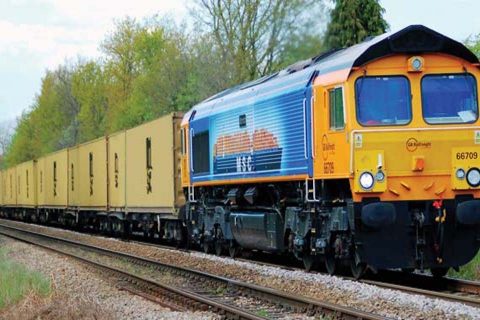 Published on 11-08-2022 at 11:52
GBRf has been running MSC branded locomotives and trains for almost twenty years (GBRf)

The UK arm of global shipping carrier MSC has announced a successful shake down of its new Anglo-Scottish rail service. What is effectively a land cruise for containers, takes traffic between ports and terminals in the West of Scotland and what the company calls global trade routes, via Hams Hall terminal in Birmingham and on to ports at Felixstowe and London Gateway.

MSC UK says the service, which originates at Mossend, just outside Glasgow, will also feed into shipping services at Grangemouth and Greenock. The new service is a boost for Scottish trade, and also represents a revival of the so-called ‘land bridge’ – a logistics routing across Great Britain largely abandoned after Brexit due to administrative complexities.

Expansions and resurgence at Mossend, Grangemouth and Greenock

Choosing Mossend as a hub for the new service, emphasises the value of the investment in the terminal just to the south east of Glasgow. The owners in Scotland have been undertaking a major expansion. Nominated Mossend International Railfreight Park, the eight road terminal will have capacity for sixteen trains daily.

The location is a short run from Grangemouth, which has also seen significant investment recently. Forth Ports upgraded the handling there, specifically lengthening the sidings to cope with modern, full-length intermodal trains. Greenock, the deep water port on the River Clyde, has been known by a variety of names, and has more recently become a major cruise terminal. However, the industrial heritage of the port has never been forgotten, and MSC UK among others run frequent bulk and container traffic into the quayside. MSC has a regular sailing from Liverpool, with a weekly container ship alongside at both quaysides.

The service is good business for rail freight operators. “Together with our partners GB Railfreight (GBRf) and Maritime, the new service will add greater flexibility for customers to move cargo to and from anywhere in Scotland and connect to global trade routes via the ports of Felixstowe and London Gateway”, said Jonathan Burke, Operations Director at MSC UK. “This enhancement to MSC UK’s long-established intermodal network offers our UK customers seamless [connections for] their cargo across road, rail and sea; delivering an efficient and cost-effective solution that helps contribute to our customers’ sustainability goals.”

MSC says it continues to make significant investments in its inland solutions offering. The rail intermodal network compliments their global road and barge network. For rail freight operators, it is an opportunity eagerly grasped. John Smith, the CEO of GB Railfreight said it demonstrates the commercial value of collaborating. “GBRf delivers wider sustainability benefits for every region across the UK and grows the rail freight industry.”

The intermodal service is scheduled to run six days a week, with terminal management responsibilities given over to Maritime. “MSC UK have decided to utilise both of our terminals at Mossend and Hams Hall to launch this service”, said John Bailey, Managing Director – Intermodal and Terminals, for Maritime Transport. “Our continued investment in intermodal services and infrastructure means the two sites, form our network of seven fully open access terminals, can collect or deliver customers’ cargo from anywhere in Scotland and connect seamlessly to the ports of Felixstowe and London Gateway and mainline services to destinations around the globe.”