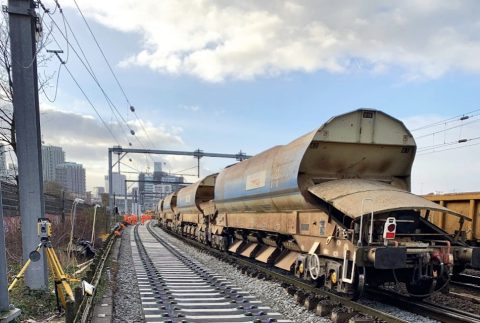 The UK government may have cancelled plans for a dedicated high-speed line across the Pennine Mountain range, but work continues to improve the existing network. The Trans Pennine Upgrade (TRU) project has been criticised as a ‘make do and mend’ alternative to an all-new dedicated route, connecting the west and east coasts of northern England. However, supporters claim it is a step change in connectivity for passengers, freight and the economic recovery of the region.

The recent announcement of plans and a nine billion pound funding package (10.7 billion euro) for the West Yorkshire section of the Trans Pennine Upgrade turned signals green on an ambitious part of the scheme. Quadrupling of the busiest parts of the main line, and modern signalling, will see capacity on the line increase, to meet latent demand. The industry has high hopes

Funds made available earlier than expected

Network Rail, the national infrastructure agency, now has the go-ahead to radically rebuild the line between Huddersfield and Dewsbury as part of the Transpennine Route Upgrade. The scheme will see twice as many tracks installed, major renovations at Huddersfield, Deighton, Mirfield and Ravensthorpe stations, and the track layout radically redesigned.

The legal instrument – a Transport and Works Act Order – required for any project that involves building new sections of railway outside of the existing boundaries – was recently approved by Grant Shapps, the Secretary of State for Transport, six months earlier than expected. However, many observers believe that was only possible because funds were made available by the cancellation of plans for a dedicated high speed line across the Pennines, and ditching the Eastern Leg of HS2.

Nevertheless, Network Rail, charged with delivering the rebuilt line between Manchester and Leeds, and on to York, is confident it will deliver a new transport corridor. Not only will it help encourage economic growth in the North of England, Network Rail say these major improvements will ultimately deliver more frequent, faster trains along a cleaner, greener, more reliable railway.

The needs of freight observed

In a recent presentation to members of the Rail Freight Group, Holm explained how the project had been accommodating the needs of freight. “We’re approaching benefits realisation by looking at the whole railway system”, he said. “The key components of this are infrastructure, operations, timetable and rolling stock, [all of which] mean something to passengers, freight or stakeholders.

“TRU is a major, multi-billion programme of improvements that opens up a lot of opportunities for freight”, says Network Rail’s Holm. “We’re committed to working with freight industry partners to deliver these much-needed improvements. “[The] key next step for us is working to develop a TRU freight remit with the Department for Transport.”

Transport Secretary Grant Shapps will likely sign off on the freight remit. With available funds now raised from the original project budget of around three billion pounds (3.6 billion euro) there should be some headroom. While the minister claims to have tripled the budget, there is some reaccounting in the process – a sharp practice the present UK government has been accused of more than once.

“I’m ensuring The North is at the forefront of the government’s Levelling Up agenda and guaranteeing gold standard services set to deliver greener, faster and reliable services through Northern Powerhouse Rail, electrification and additional train tracks”, he said in a written statement, somewhat undermined by an accompanying picture of two not exactly up-to-date semaphore signals … both set at halt.

Neil Holm does admit that there will be disruption. It goes without saying that he, and every stakeholder would prefer to avoid that, but Network Rail is working to minimise the need for customers to do the wrong sort of modal shift. “Work continues this year to build resilience on our diversionary routes, begin preparations in Huddersfield and continue electrification work [between] Manchester – Stalybridge and York – Church Fenton.

“This requires all the industry delivery partners to work collaboratively to realise these benefits”, added Holm. “Everybody has shown support and provided feedback on our plans throughout the planning process. Now we have this approval, we can progress our ambitious plans and designs and continue to work with communities on what’s to come.”

“More reliable” and comparatives, yes, but reliable, simply is the requested and by willingly paying clients, handsomely rewarded…
(Flora of comparatives, when advocating for railways, is misleading, is “new speech”, as existing is far from good.)
Regardless of added resources for “maintenance” (repairing) predictive and “optimal”…, etc., just a minority affords luxury of not caring about eta and JIT, at their ware transports.
A New Old Railway, a safely sustainable, is requested.

It is so easy to be negative & do nothing. A “can do” co-operative mind set needs to realise that all benefits postulated by MPs will never come about until the planners put more steel on the ground as they say they will do between Cleckhuddersfax & Dewsbury – good news for the Market there. The nub of the matter is that three more rail trans-Pennine routes are essential, re-aligned Colne – Skipton being the most northerly. Underground Piccadilly HS2 terminal makes more sense than lateral ones.