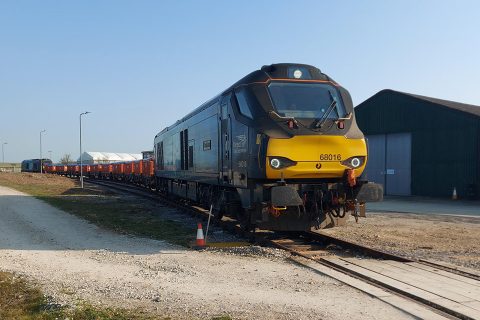 Nuclear Transport Solutions, the specialist rail freight operator, says its project to dispose of more than 1,000 stainless steel waste drums has successfully completed its initial rail transfer. The operator, which is the parent of Direct Rail Services, has been working on a contract to dispose of more than 1,000 stainless steel drums of waste at Nuclear Waste Services’ Low Level Waste Repository site from the Winfrith Magnox Reactor site in Dorset, south-west England.

The specialist handling experience at NTS has been put to good use in the project, where there is zero tolerance for any errors. Each weighing around one tonne, the drums have been successfully moved in their initial rail transfer. The project has been several years in planning and is being described as a prime example of the “One NDA” approach (Nuclear Decommissioning Authority).

The drums, which originated from the Steam Generating Heavy Water Reactor (SGHWR) at Winfrith, were placed in the Treated Radwaste Store (TRS), awaiting transfer to the Harwell Intermediate Level Waste (ILW) facility near Didcot in Oxfordshire. However, due to a period of radioactive decay, they have been reclassified from Intermediate Level Waste to Low Level Waste, allowing early disposal at the Repository site with significant financial savings.

“The shipment of these drums is a significant achievement for the site”, said Andrew Munro, the Winfrith Site Director. “It is another step closer to completing our decommissioning mission and returning the site to heathland with public access. Many thanks to all parties involved who have made this possible, a great example of a collaborative approach.”

More than two years to run

Moving nuclear materials has been a feature of the UK rail freight scene for generations. Steam locomotives hauled even flask trains in the early years of the industry. More modern traction is used these days, although the once ubiquitous class 37 diesels, which predate the first working reactor in the UK, have been employed on the duties. Lately, NTS, through their rail subsidiary, have employed modern class 68 diesels – configured ‘top and tail’, giving the flask trains by far the greatest power-to-weight ratio of any operation in Europe.

The drums are being transported by rail in cabriolet containers and arrive at the Repository site in multiple consignments. Eleven consignments, each transporting 10 cabriolet containers of 10 drums, will arrive on site by rail transfer provided by NTS approximately every 13 weeks, depending on the retrievals process at Winfrith. That gives the project a further two and a half years to run.

The One NDA approach is a thorough working protocol, requiring collaboration across the group, safely enabling an early, fit-for-purpose transport and disposal solution to support ongoing decommissioning activities.