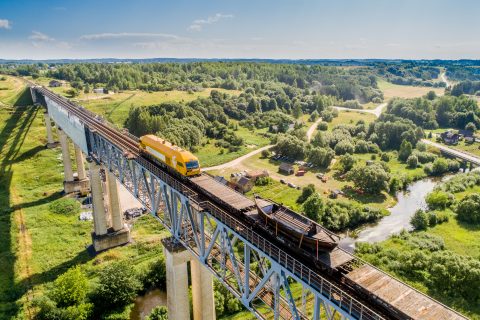 LTG Cargo, the freight subsidiary of Lithuanian Railways, commenced a new project for the rail transport of oil to Ukraine. Twelve trains carrying around 12,000 tonnes of petroleum have already departed, while the company plans to run 2-3 weekly services in Ukraine’s direction.

“Carriage of oil products is another important step to help Ukraine solve the challenges of oil shortage and contribute to meeting the needs of the country’s market. The cargo will be transferred from the narrow gauge to the broad gauge only once on the territory of Ukraine so that the route can be implemented efficiently and smoothly,” commented Eglė Šimė, head of LTG Cargo.

Ukrainian Railways also in the game

Even though LTG Cargo’s role in the new corridor is vital for transporting oil products between Lithuania and Poland, the company actually undertakes a very short leg of the route. It transports oil in tank containers between the terminal in Mockava, very close to the Polish border, and Trakiszki in Poland. The covered distance is roughly 15 kilometres.

After entering Poland, oil products are transported by Polish carriers also in collaboration with Ukrainian Railways that load the cargo after a gauge change at the Polish-Ukrainian border. The cargo’s final destination is Yahotyn, east of Kyiv.