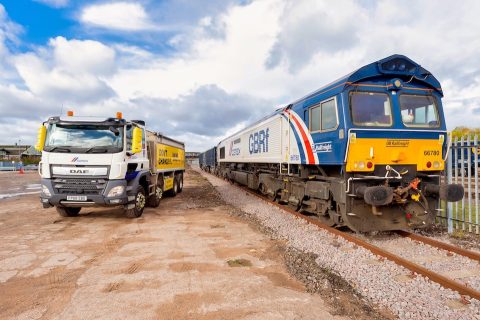 The UK operations of aggregates and construction materials company CEMEX claims a 17 kilo-tonne reduction in CO2 emissions. They put that down to their policy of optimising their supply chain for the lowest possible emissions. Rail freight has played the most significant part in their UK plans so far.

CEMEX say their commitment to decreasing CO2 emissions – by reducing the numbers of road truck movements made by its business – has resulted in a marked increase in the use of more sustainable transport methods. The effects have not just been seen in the UK but across the whole of their European operations.

In the UK, CEMEX say they recorded a 3 per cent rise in rail freight volumes. In itself, that statistic doesn’t prove that their business is moving further towards rail. However, they say that percentage move alone saved 143,000 road movements and consequently nearly 17kt of CO2 from being released into the air. Since 2012, CEMEX has increased the amount transported by rail freight in its UK operation by 50 per cent.

“We have been clear in our intention to cut the carbon emissions generated through our supply chain”, said Matt Wild, the vice-president of supply chain for CEMEX EMEA (Europe, Middle East and Asia). “[We achieved this] by accelerating a modal shift from road to rail, river and sea freight.”

Rail not the only player

The transition has been even more marked in mainland Europe. In Poland, say the company, there was a 28 per cent increase in the volume of aggregates transported by rail over the last year, 2021-22, with material travelling from 11 rail depots to 43 destinations across the country. CEMEX figures put the saving in CO2 at 31kt.

While rail is the perceived reducer in emissions, it’s not the only route to a net-zero operation. In France, the business grew the tonnage of aggregates and landfills moved by nine per cent by river barge. Similarly, in Spain, CEMEX increased its export-import volumes moved by ship by over 50 per cent in the past year. “It is satisfying to see our European operations helped by our continued investment into these networks, such as opening a new rail depot in Birmingham, UK”, said Matt Wild. “These all play a part in our efforts to achieve net zero concrete globally by 2050. We can develop this growth further over the remainder of 2022.”

Shifts, is the new standard.
As at “global” devices, for sake of added capacity, lower costs, added utilisation, etc., – and lower emissions – as well at railways… shall be provided, for future added, high loads.
(At any upgrading, etc., 70 kip safely allowed axial load now should be min., provided for, etc., etc.)