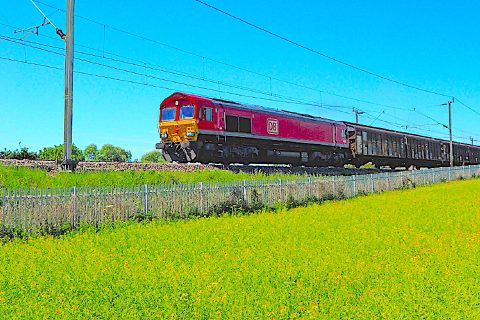 A week after the launch of the UK government’s strategy document, “Future of Freight – a long term plan”, which seems to have lasted longer than the UK government, questions have been raised about the ambitions contained within. Despite pressures on the UK economy, lobby groups want to see more commitment to stimulate the sector.

Several groups from around the UK, have urged the government to go further. They want Westminster to show more commitment to developing rail freight opportunities as a way fo stimulating the economy, helping to achieve the ‘levelling up’ agenda, and meet the country’s self-imposed obligations to delivering a net-zero carbon economy by 2050, or even sooner.

In a somewhat lengthy response from the English Regional Transport Association, the government is encouraged to put money behind its proposals for the Future of Freight. “What we need is grants not loans for pieces of rail infrastructure to boost rail-connectivity to the wider rail network”, says their statement.

ERTA gives the example of Brackmills Industrial Estate in Northampton, which is bisected by a moribund line. They say a grant or direct government promotion could connect the vast estate directly to the West Coast Main Line. They say they want to see what they call strategic missing links reinstated, and an informed policy of planning and tailoring development to keep alive the possibility of rail re-connection.

The nationwide and influential advocates for rail transport, Railfuture, believe that tinkering around the fringes of the network is not enough. “A doubling of rail freight capacity is required by 2050 to shift freight traffic from road to rail, reduce carbon emissions and reduce congestion on the road network”, they say. “For example, creating a western access to Trafford Park freight terminal will relieve the Castlefield corridor, increase freight capacity and shorten freight journeys.”

Many industry insiders are looking towards new markets as a means for rail freight to grow. Light logistics has often been cited as the big ticket item, with many players on the sidelines. Network Rail, the infrastructure agency has already conducted a survey of facilities at major stations – with a view to hosting modern parcels traffic.

Legislation should be considered

ERTA voice an often discussed idea, which has yet to gain traction. They say a triple pronged approach to rail freight growth requires attention to volumes, shapes and sizes carried by rail. More radically, they say that legislation should be considered. “Give incentives and legal requirements for all freight [movements] over 50 miles [80 kilometres) to explore using rail.”

That latter proposal must echo uncomfortably for campaigners in Derbyshire. Recently, the Manchester and East Midlands Rail Action Partnership (MEMRAP) were disappointed in their ambitions, with proposals to repoen the direct route between Derby and Manchester knocked back. That route, which would fall into that ’50 mile’ criteria, would potentially carry aggregates traffic from the Peak District, as well as opening up a route for Trafford Park bound intermodal loads.

Extol the benefits of rail

MEMRAP say that the government backed programme to restore closed lines, the Department for Transport’s ‘Restoring Your Railway’ programme has proved the potential for rail, but it goes not nearly far enough. “This popular, highly competitive initiative saw some 85 proposals submitted in the third round, of which just 13 have been approved for funding.” ERTA agrees. “2050 is too little, too late for modal choice for modal shift in a climate emergency”, says their spokesman Richard Pill. “2030 is the cut-off date for irreversible climate change. We need plans hitting the ground now.”

Already on the ground are rails in the Scottish Borders. Connecting England and Scotland has been the loftier ambition of the Campaign for Borders Rail. That lobby group, which has already been effective in reintroducing rail services along the north part of the route, from Edinburgh to Tweedbank, remain frustrated that extension over the remaining 66 miles (110km) to Carlisle remains unfulfilled. They argue that freight traffic, which has not been included in Scottish government figures, would greatly enhance the business case for the line. Like MEMRAP they continue to develop their proposal, working with key stakeholders to improve their understanding of the significant benefits of the proposed reinstatement, with rail freight a live part of that mix. “Government needs to be working with partners for putting tracks back”, says Richard Pill of the ERTA. “Extol the benefits of rail, equip operators to do more and incentivise. Without government carrot and stick frameworks, incentives, development for rails, depots, access and joined-up-networks, this cannot begin to be realistic.”

Within Hemisphere a “Singapore” urgently is needed. (Regardless of Brexit, Goal of EU shall remain!)
Regardless of railways being a energy effective device, Mode is Device for on shore feeding of ports!
For benefitting of England/Scotland potential, nearness to ports, Ocean, etc., now a decisive upgrading of the railways is demanded.
Electrification, yes, but a timely. 70 kip safely allowed axial load shall be min, etc., etc.! (Other devices upgrade…)