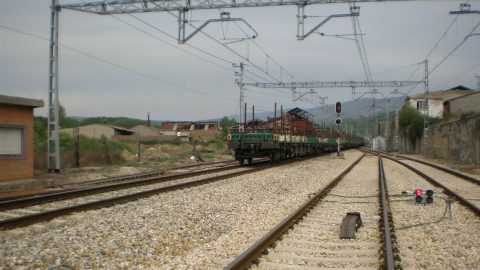 The Industrial Engineering Association of Castille y Leon in Spain thinks rail lines and capacity could be better utilised for freight. At least, this seems to be the core message of the group’s demand to reopen existing rail freight lines in the region and connect them to European corridors “imminently”.

The association’s positions were shared in various Spanish media. They say Castille y Leon has an unexplored rail freight potential, hindered by unused parts of the Spanish railway network crossing the region.

The group says that lines and other infrastructure already built but abandoned should come back to life. They view this scenario as an “opportunity of great interest for Castilla y León, since the recovery of the railway lines linked to the Atlantic Corridor, one of the main ones in the Peninsula, is a project that can receive funding from the EU.”

In the association’s understanding, reviving unused railway lines and connecting them to vital corridors should not be that complicated. Their argument is based firstly on Castilla y Leon’s location, which bundles different railway lines of the Network of European Corridors.

For instance, they mention the corridors connecting the region with the “northern ports (Vigo, A Coruña, Gijón and Bilbao), Europe through France, the peninsular east via Miranda de Ebro, and also, the lines connecting it with the Portuguese ports of Aveiro and Oporto (through Salamanca)”.

Moreover, they underline that the project will not need vast public or private investments since it falls under the umbrella of EU investments. “With a reduced investment, the best alternative for freight land transport would be put into service,” commented a group representative.

The association has also devised an idea of how these lines, should they revive, could be utilised optimally. Its representatives argued that the best model to follow in this case would be that of a Proximity Railway Operator (OFP) as implemented in other countries like France, Sweden and Germany.

An OFP is a small/medium-sized railway operator that undertakes rail freight transport for short distances. “Implementing an OFP would make it possible to integrate road and rail formulas through the main logistics centres of the region. This system would make it possible to offer a more economical and agile service for ‘last mile’ rail routes, which would use both the current rail network and lines with weak traffic or those that have been rehabilitated and are back in service”.

Success stories of regions’, has been based upon nearness to a port and in absence of sea transports, railways remains the large scale device. Regrettably, however Industry has failed at meeting with a market changing. (Currently, for majority, the single available high quality device is the on road trucks, up to 1000 km from port.)
All other devices by sea and by air, also the on road device upgrades for higher loads and for lower costs, etc. So shall the railways!
Quality pays!