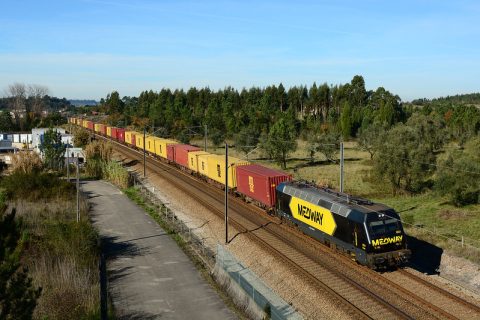 Rail freight operator Medway Italia SRL has signed an agreement to use the Dutch rail infrastructure and services from 1 July. The Belgian branch of Medway Italia will manage the organisation and operational adjustment of train traffic in the Netherlands.

From Friday, July 1, freight trains from Medway Italia will run through the Netherlands, Belgium and Germany fourteen times a week. The route starts in Antwerp and then passes through the German terminals in Frankfurt am Main, Wörth, Germersheim and Neuss. The trains to Neuss (North Rhine-Westphalia) run via the Brabant route between Roosendaal and Venlo in the Netherlands.

Freight traffic will not increase with the arrival of Medway Italia on the Dutch railway network. The company will take over current third-party rides. For the other destinations, the trains will run via Aachen. Medway Group (MSC) was founded in Portugal in 2009 and has also operated under the Italian flag since 2018, with plans to expand its activities in Northern Europe further.

Medway Belgium, which falls under Medway Italia, will enable MSC’s expansion in Northern Europe. The company was recently established and is headquartered in Antwerp, Belgium. It will start undertaking operations gradually. The first step will be to take over the MSC shuttles between Antwerp MPET and the German hinterland destinations Neuss, Frankfurt, Germersheim and Wörth. In a second phase, the portfolio will be expanded with other existing flows and new projects via MSC’s network.

The port of Antwerp-Zeebrugge will play a major role in MSC’s further growth in Northern Europe. Ultimately, the freight carrier plans to operate as a 100 per cent neutral and private freight rail company in the Netherlands, Belgium and Germany.

Contemporarily an upgraded, a New Old German Railway, seems urgently requested! (Capacity and utilisation need to be added, at existing.)
Not surprisingly, technicalities, optimal, 100 years ago, no longer are timely. (32, 5 ton, axial load, safely allowed for, now is a min. , etc.)