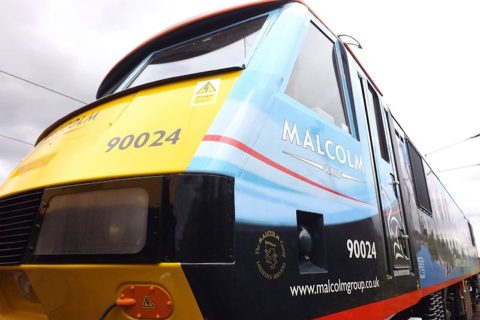 Amidst all the confrontational rhetoric of disputes and strike action, there are some words of consideration for rail freight. Caught in the storm without being blamed for the weather, rail freight is taking a hit along with the whole network, but the industry at large has held up an umbrella and expressed confidence in the rail freight sector.

Putting freight on rail remains a strong message from within the industry. However, strong support from other sectors is the key to growth. Two leading logistics operators have expressed that support: Bellshill-based John G Russell and the Malcolm Group. They have hub operations out of Daventry International Rail Freight Terminal (DIRFT) in the English Midlands.

Speaking from their headquarters near Glasgow, Ken Russell, the sales and marketing director at John G Russell (Transport) Limited, said rail freight was a critical part of their business model. “Rail freight is exceedingly important to us”, he said. “We’ve been using rial freight since the seventies and contracting our own trains since 1983. It has been a very important part of our supply line.”

Russell echoes the sentiment of the government in Scotland, who have only recently taken the reins at Scotland’s Railway. The Edinburgh government stripped the Dutch company Abellio of their passenger operating franchise and effectively nationalised the railway north of the border.

A key part of business

“We specialise in moving volume throughout the length and breadth of the UK”, says their chief executive Andrew Malcolm. “We put our first toe in the water with two trains a week running out of Grangemouth [port terminal on the river Forth, between Glasgow and Edinburgh] back in 2001. Today we are probably running between 800 and 1000 domestic containers a week. It’s a key part of our business.”

Lagging behind the UK

“Every year, millions of tonnes of freight are transported on Scotland’s Railway”, says the Scottish government, which has produced a slick video to promote its commitment to rail freight operations. “Removing more than 90,000 heavy lorries from Scotland’s roads. Rail freight reduces CO2 emissions by up to seventy-six per cent compared to road.”

However, Andrew Malcolm says other factors are behind the potential surge in rail traffic. “[For] investment in trucks and drivers we are lagging behind with the UK market needs and demands. Raif freight has got a massive opportunity in the coming months and coming years ahead”, he said.

“I wouldn’t like to be doing the volume we do, up and down between the Midlands and Scotland with road vehicles because the resource we’d require, and the number of people we’d require, we just wouldn’t manage it”, said Ken Russell. “Rail is an absolutely key factor in what we do. To achieve the fundamental change for decarbonisation, rail freight has a huge opportunity and what we need to ensure is that the capacity is there to take it. The signals are there. The inquiry levels are as high as they have ever been for rail freight solutions, and that’s partly down to the drive for decarbonisation and partly down to the driver shortage on the roadside.”

It may take more than a week of industrial disputes to shake the faith in rail freight logistics, but both key managers agree. Rail freight is at a junction of opportunity. Events this summer could decide if that opportunity points to the main line or down a dead end.