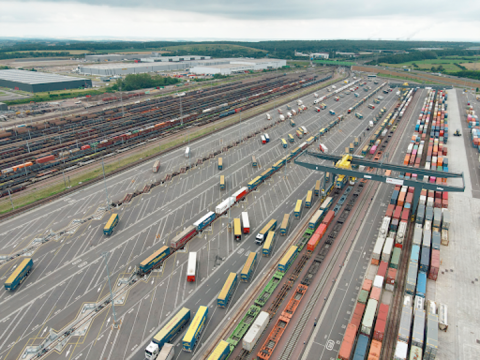 Published on 10-06-2022 at 06:30
Bettembourg-Dudelange terminal in Luxembourg. Source: CFL Multimodal

What is an integrated terminal, and what role can it play in attracting more cargo to rail? For Eric Lambert, senior business development manager at CFL Multimodal, the concept is key in developing a unified and flawless supply chain while promoting a modal shift to greener transport modes like rail.

Are you interested in learning more about the integrated terminal concept and how vertical and horizontal loading technologies can complement each other? Do you also want to explore how the situation looks in central Europe and the Baltics regarding these terminals?

Eric Lambert will be among the speakers of RailFreight On Tour-The Lithuanian Edition taking place next week on 14-15 June in Vilnius, Lithuania. He will discuss how the Bettembourg-Dudelange terminal in Luxembourg could work as an example for similar investments in central Europe and the Baltics. Do you want to learn more? You can see the event’s programme here and register here.

What is an integrated terminal?

For Lambert, “it’s a terminal well placed in the middle of a logistics area, or serving as a hub between industrial areas, where an interaction between the different elements of the supply chain exists”. He underlines that “only a few of these terminals already exist, for instance in Dourges, France, or in Verona, Italy”. Sometimes, he mentions, a terminal and a logistics distribution centre are neighbours, but without any interaction, so it’s completely different from a fully integrated terminal.

Additionally, he mentions that the scarcity of such terminals is visible throughout Europe. “There is a lack of integrated logistics centres in different regions of Europe. Several studies launched in the Interreg Project REIF have demonstrated the need for this type of logistics centre in central Europe, for instance.

As for the Baltics, he mentions that Lithuania is the transit gateway for all Baltic states, with road transport representing 13 per cent of its GDP. “The transferable market from road to rail is potentially significant, and the transition should occur in collaboration with the road transport companies”, he emphasises. Understandably, utilising the knowledge and experience of a fully functional rail-road terminal like Bettembourg-Dudelange could also contribute to this process.

So how can a terminal reach full integration?

From his experience, Lambert stresses that this can only occur in several stages. For the Bettembourg-Dudelange terminal, full integration happened in three steps. “The old rail-road terminal dates to 1979, and the integration of the other elements of the service chain was done through three elements: firstly, defining and implementing a robust external growth strategy was critical. Secondly, aligning with the State’s development plans was equally important, and finally, committing to meet the client’s needs and flexibility was the gamechanger”.

“NO TRAIN NO GAIN” (Railway News). Rail produces the opportunity for minimizing/eliminating, long-haul, regional, & city bottlenecks. The “sunk” costs & “opportunity” costs must be included to avoid further unsustainable costs of cargo-parcel throughput, & all the massive “multiplier” effects. Large to small unit movements can be accomplished with on going advances in IoT/AI to the fastest path to break-even cost.