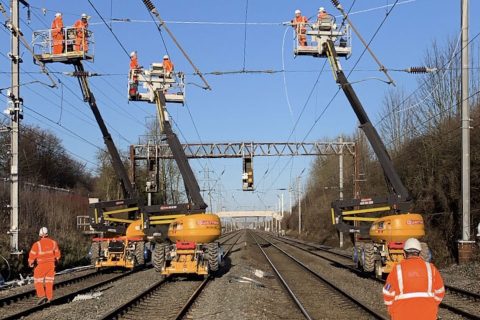 As part of the largest upgrade to the Midland Main Line since it was completed in 1870, Network Rail, the UK infrastructure management agency, has notified contractors of the next stage in the electrification programme that will eventually extend wires from London all the way to Nottingham and Sheffield. Aside from serving a number of population centres, the MML is an important freight route, carrying aggregates and cement traffic from the Peak District to London and the South East.

Network Rail is preparing to receive bids to carry out extensive preparatory works to make the route ready for electrification. The project has a chequered history, with the UK government changing the specification and scope and, at one point, ‘pausing’ the work and threatening the future of the whole programme. However, the programme is firmly on the investment agenda for Network Rail. There’s no indication that will change when Great British Railways takes over next year.

As always, Network Rail emphasises the benefits to passenger traffic, but the collateral advantages for freight are evident too. Combine electrification with bi-modal capability and potential for hauling heavy aggregates traffic and cement from the Derbyshire quarries already has the attention of operators.

“We’re at a really exciting stage of the Midland Main Line Upgrade”, said Gary Walsh, East Midlands Route Director for Network Rail. “We’ve packaged multiple projects together to keep disruption to a minimum”, he added. The historic nature of the line – over one hundred and fifty years old, means there are significant heritage issues – such as maintaining the integrity of the historic platform canopies at Kettering and Wellingborough stations, the latter where trials have already taken place with advanced electrification techniques, including retractable overhead power supply.

Contractors have been brought up to speed with the next phase of work on Midland Main Line electrification programme. Network Rail plan a briefing shortly. They say that when completed the project will allow electric and bi-mode operation over the entire remaining 86 miles (139km) of the MML, from South Wigston to Sheffield. The route has 67 significant structures, including Victorian masterpieces like the Dronfield Viaduct, just south of Sheffield.

Electrification on the MML was completed between London and Corby some time ago, allowing commuter and inter-urban services to run under the wires. The next stage of procurement for the MML electrification programme is split into several route sections. The planned briefing for would-be contractors will take place online and physically at Pride Park Stadium in Derby on 15 June.