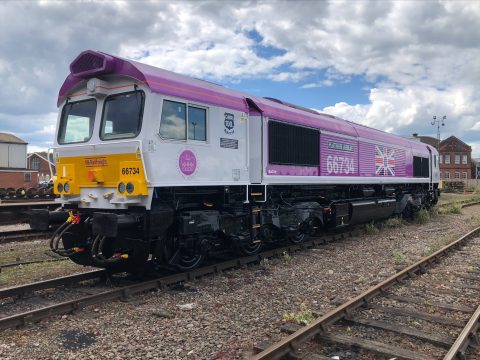 Union Jack flags waving from drivers’ cabs, maybe even ‘God Save the Queen’ on the horn and a right royal drive past. From 2 to 5 June, the UK is celebrating the platinum jubilee of the queen. Whatever the level of street party and formal celebration, if an operator could have gotten a locomotive down The Mall, they would have done.

Street parties at depots and stations have been the norm, with plenty more to come. Red, white and blue has almost replaced safety orange as the most common colour on the UK network. National differences have been put on hold for a while as the four nations have come together for a much anticipated celebration – and a right royal hang over to follow.

Plastic party hats off to GB Railfreight, who managed to combine the unveiling of their one-hundredth class 66 locomotive in the heart of the celebrations. Not only that, the locomotive has been out-shopped in an eye-catching patriotic livery. 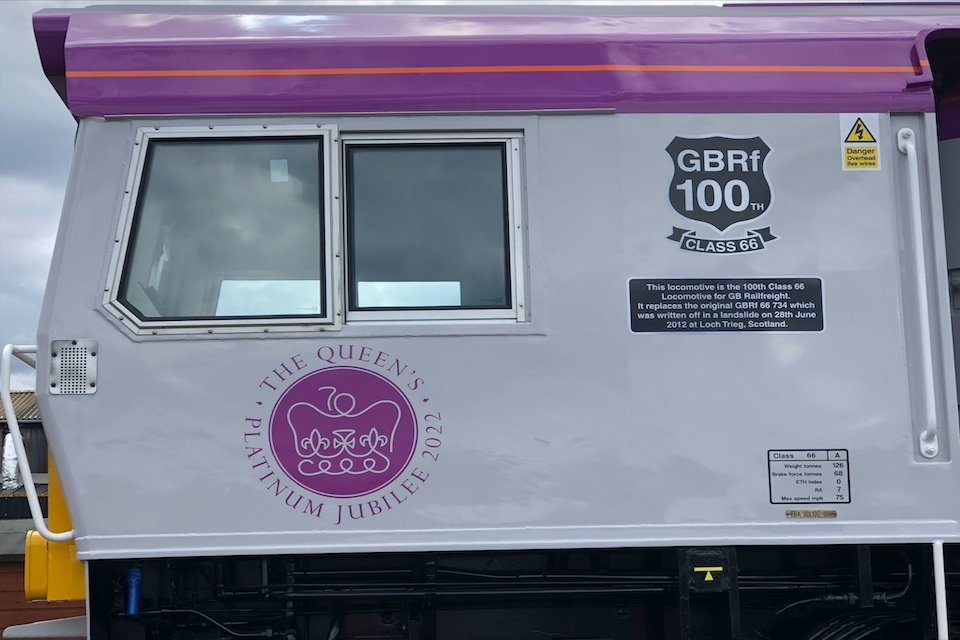 66734, has been painted in a regal purple and named “Platinum Jubilee”. For once, there isn’t a quote from the chief executive John Smith, but we hardly think he was lost for words. The locomotive replaces the original 66734 which was written off ten years ago in a derailment at Loch Treig in north west Scotland in 2012 – just after the Diamond Jubilee in fact.

Network Rail has celebrated the Jubilee in the traditional manner. They’ve begun a huge four-day possession around Manchester and their engineers are working around the clock to upgrade the signalling into the east of the city. “The vast majority of Britain’s rail network will be open as usual during the Queen’s Platinum Jubilee bank holiday weekend”, said a statement from the infrastructure agency. Well, unless your celebrations include running a train through the east end of Manchester that is.

There are no major works planned for London, making this unusual Thursday to Sunday public holiday period unusual for one more thing: all London terminals being open. “With no closures into any of the major London stations, passengers can rely on the railway to join the Queen’s landmark celebrations”, said a Network Rail statement. “While hundreds of projects are being delivered over the bank holiday, the majority of those are maintenance works with no disruption to passenger or freight services.”

Well, at least Her Majesty should be able to jump on her Elizabeth Line, and get back from Paddington to Windsor no problem after the festivities then.