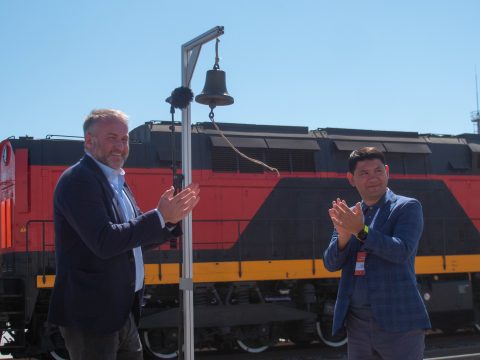 The new terminal in Dostyk that was opened a year ago saw the opening of its second stage this week. According to operator PTC, this will increase the capacity of this node from 160 thousand to 320 thousand TEUs per year.

The opening of the second phase was launched sooner than originally planned, because the volumes through the new facility on the Kazakh border with China were more than expected. “Aready in August-September last year, we realised that we had reached the roof of the volumes this first stage could handle, while the interest of our customers in additional volumes remained. That is why the second stage was started and built so quickly”, said Timur Karabayev, the head of PTC Holding, which is the parent company of the terminal.

PTC Holding invested 9.2 billion tenge (20,7 million euros) in the construction of the second phase of Dostyk TransTerminal. One of the main features is the railway connection from the terminal to the highway, for which the construction of 13km new railway was needed.

This 13-kilometer section is now operated by Kazakhstan Temir Zholy, the national railway company. It will become a regular tariff area (in Kazakhstan the tariffs differ per region), equipped with all the standards of the national company. In the future, the number of access roads on this section may increase.

The city of Dostyk is a well-known transit point for Eurasian traffic. The near terminal was launched six kilometres west of the existing Dostyk terminal and very close to the Dostyk-Alashankou border crossing, among the most popular border crossings. A second terminal was needed, as cargo traffic via this border point is always high and therefore congested.

Once complete, the new terminal will provide additional capacity of 700,000 TEUs on the busy route. A third and fourth stage are in the pipeline. The first container train with household appliances has already departed from Zhengzhou (China), and it is currently on the way to Duisburg (Germany), via the second stage of this new terminal..