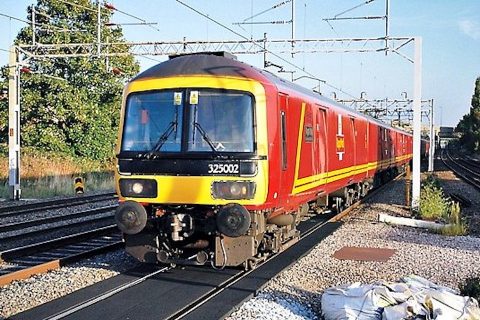 Royal Mail, the British postal service, is to double its daily rail logistics operation between England and Scotland, making its Shieldmuir depot in Motherwell near Glasgow busier than ever in this century. The announcement of three additional daily services will ramp up traffic to around 600,000 parcels a day. The news has been heralded as a vindication of the light logistics movement for rail.

Reports say that Royal Mail will add three new trains to their existing services between England and Scotland within a year. Currently, dedicated trains run between the mail depot in Willesden in northwest London, the sorting office in Warrington in northwest England and Shieldmuir in Central Scotland. The new services will run from Royal Mail’s purpose-built facility at the Daventry International Rail Freight Terminal (DIRFT) to Shieldmuir, just south of the passenger station, directly adjacent to the West Coast Main Line. The overnight paths will avoid busy long-distance passenger services and intensive commuter traffic around London and Glasgow.

Royal Mail, the familiar red livery on everything from post boxes to aircraft, has been a railways customer for almost two centuries. Although that relationship was nearly broken in 2004, the national carrier has since invested in its dedicated fleet of electric multiple units and is now set to increase its rail-based operations substantially.

The company, founded as a royal charter in 1516, is building a vast sorting facility at Daventry as part of the existing rail terminal there. When completed next year, the company will, for the first time, be able to run services from there to sorting offices around the country. Initially, they plan to run a trio of trains to Shieldmuir in Motherwell.

Parcels traffic back in the mainstream

The news comes as a shot in the arm for the light logistics sector. Several companies have been easing into dedicated trains, running at passenger line speeds and potentially operating out of passenger terminals in the centres of the UK’s cities. While there is a broad interest in seeing so-called parcel traffic back in the mainstream of railway operations, there have been some hiccoughs with reliability and service.

However, the general trend is towards more parcel traffic on the rails. Staffed travelling post offices – where mail was sorted on the move – were discontinued in 2004. However, the Royal Mail retreat from rail was short-lived, with postal traffic back on the network by Christmas, albeit unstaffed and already sorted. That trail run has never ended.