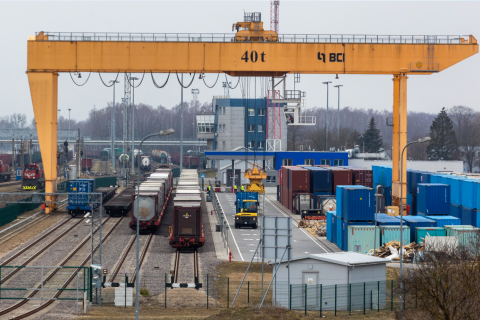 More and more freight trains are up and running to transport export products from Ukraine to the rest of Europe. Rail is considered to be the most attractive solution to replace sea shipping, which is currently blocked due to the Russian invasion.

This week, Lithuanian Railways (LTG) Group launched a test train running between Ukraine and Lithuania via Poland, the first in history according to the organisation. The Austrian railway company Rail Cargo Group starts with a daily train as soon as the month of May starts, carrying agricultural products out of the country.

LTG Cargo started a test drive from Kaunas Intermodal Terminal (KIT) to Ukraine via Poland on Wednesday morning. The train is on the way to pick up 1,000 tonnes of various local goods and return them to the KIT, where it will be distributed in the Baltic region.

“With the onset of the Russian war in Ukraine, conventional and regionally important logistics chains were disrupted, and the project is expected to contribute to their rebuilding through an alternative route through Poland”, LTG Cargo says.

“The pilot will aim to assess the technological aspects of the new route, the deadlines for freight transport, the potential logistics challenges and their solutions. This route will only run on the narrow European gauge, which runs from KIT via Poland to a terminal on the Ukrainian border. This means that if the project is successful, part of the cargo will be able to be transported to Kaunas without changing the track and without reloading it.”

Already up and running is the service of ÖBB’s Rail Cargo Group (RCG). From March to April 2022, RCG organised grain trains from Ukraine to Germany every other day. In total, 60,000 tons of grain were transported.

This will now become a daily train, for at least three months. The grain train of RCG runs from Ukraine via Čierna (Slovakia) towards Brake in northern Germany. Of the 30 trains, 5 trains will remain in the Czech Republic and Slovakia, while 25 trains reach Germany.

The rail freight links between Ukraine and Europe are a top priority for the EU. This was indicated by Kristian Schmidt, director of Land Transport at the European Commission this month. He called on the sector to “strengthen the rail and road haulage links to Ukraine, in order to keep the lifelines running”.

“Ukraine is an important partner of the EU. It is an important player in global food security, as they provide large proportions of grain and cereals. The EU has every interest in keeping trade going, and to support the Ukrainian economy so the country can stand on its own feet.

Export to the world

HAVE YOU BEEN SCAMMED OF YOUR FUNDS and is looking for a Trusted and Guaranteed Recovery Agent to help your get back your stolen funds
MR MORRIS GRAY is the right man for the job, you can reach him at Morrisgray830 @ Gmail dot com…he is very trust worthy and fast with giving results….I am a living testimony to this, he helped recovered my stolen bitcoins worth $637,000 from those scammers, and that i am grateful for…!!!!

HAVE YOU BEEN SCAMMED OF YOUR FUNDS, ASSETS COINS?? and is looking for a Trusted and Guaranteed Recovery Agent to help your get back your stolen funds
MR MORRIS GRAY is the right man for the job, you can reach him at Morrisgray830 @ Gmail dot com…he is very trust worthy and fast with giving results….I am a living testimony to this, he helped recovered my stolen bitcoins worth $637,000 from those scammers, and that i am grateful for…!!!

With all I have heard and seen about you I can boldly say to anyone that your lottery spells are excellent without any doubts. Thank you for helping me win the lottery Dr Amber. Contact him via Email: amberlottotemple@yahoo.com or via Website: amberlottotemple.com