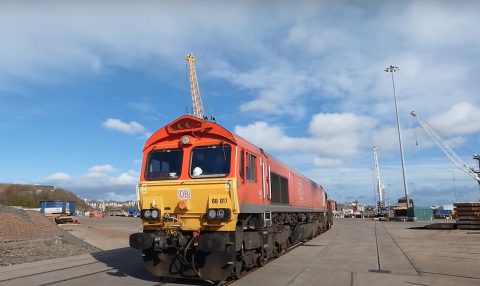 British Steel has put its products on rails between their plant at Scunthorpe in Lincolnshire and the Wearside port of Sunderland in the north east of England. The contract with rail freight carrier DB Cargo UK will see steel slabs moved by rail from the foundry to the recently reinvigorated port. There are gains for the company, the carrier, the economy of the region and the environment.

Moving steel slabs by rail will be something of a coup for British Steel and DB Cargo UK. Both parties are already applauding the relief of traffic on the busy roads between the massive Scunthorpe plant and the Wearside-Tyneside conurbation. It is also a vindication of the investment in rail facilities at the port of Sunderland, which recently saw its first commercial loads delivered by rail after a gap of more than twenty years.

Rail freight carrier DB Cargo UK announced the new contract on the day of the first working arriving at Sunderland earlier this month. “On behalf of our customer British Steel, we have now started a new service transporting steel slab from Scunthorpe to the Port of Sunderland”, said a refreshingly no-nonsense DB Cargo statement.

The Scunthorpe plant has always been a good customer for rail freight operations. However, the working to the Port of Sunderland represents a less consistent relationship with steel wheeled transport. The port only last year reopened its rail connection. It is probably no coincidence that the first train brought a load of steel into the country. That load, part of a contract for Italian manufacturer Marcegaglia, was also hauled by DB Cargo.

New flow is a bonus

The 130-mile (210km) working saw steel slabs loaded on to 20 BBA wagons delivered for export. The train weighed-in at 1087 tonnes, according to DB Cargo. A workhorse class 66 diesel was filmed shepherding the train into the port.

Finished steels for export is something of a bonus cargo for Sunderland. The port is positioning itself as a recycling technology centre, making the possibility of loads of raw materials a likely traffic flow in future. The port recently announced plans for a new 100 million pound (120 million euro) tyre recycling plant on the estate, which could generate significant additional flows in future.