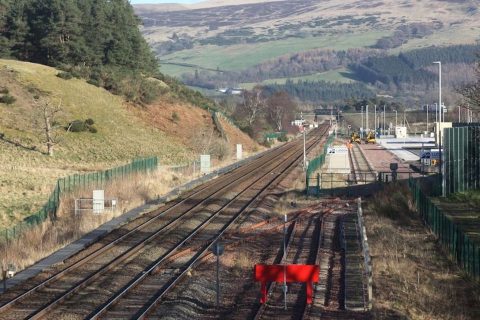 Poring over the details of Highland Spring’s water terminal

It has been in the making for over four years, and in the planning for many more years than that: Highland Spring, the iconic Scottish mineral water company is nearing the day when its first train can leave from their Blackford plant, in the heart of the Stirlingshire countryside. The company has splashed out on a modest terminal of two sidings and a head shunt.

The deceptively complicated build, providing a rail connection to the adjacent Stirling – Perth main line, is almost ready. Highland Spring has already committed to be a carbon neutral business by 2040. Their rail freight connection is the most visible aspect of that policy. The planned on-site rail freight facility, due to be operational later this year, will remove 8,000 lorries from the road and contribute towards a CO2 reduction of 3,200 tonnes per annum. According to the company, the terminal will actually help drive Highland Spring towards a biodiversity net gain by 2025.

The original plans were radically altered to avoid train movements over a level crossing at the northern end of the site. A new access to the south (western end) means the level crossing will no longer need to close for train movements. Highland Spring say their good neighbour policy includes design aspects such as screening to minimise the noise and visual impact on the community of Blackford.

Highland Spring Group also say that terminal trains will avoid 22 heavy goods vehicle movements through the village, which lies just off the main highway between the Central Belt of Scotland and the Highlands. The terminal has been long awaited, but has sparked interest in other private terminals in Scotland and elsewhere.

The extended nature of the project has been put down in part to the pandemic and its effects on business. Highland Spring Group is the UK’s leading supplier of natural source water, and much of that production has gone to the hospitality and food service sectors – both severely curtailed in the past two years. Now bottling over 600 million litres of water a year, the Highland Spring Group produces brands including Highland Spring, Speyside Glenlivet, Hydr8 and a range of private label flavoured and unflavoured waters for some of the UK’s major supermarkets and food service retailers. The group exports to 30 countries worldwide.

Just a thought;if they bottle 600m litres of water per year, is that not” steeling ” it from the rivers and streams and the fish and wild life that depends on it?