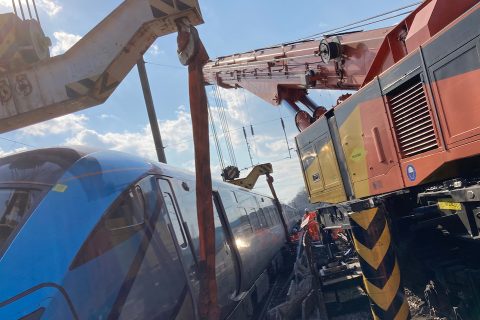 Equipment unique to specialist rail freight operator Colas Rail was recently used to rescue a stricken passenger train under complex circumstances. Colas employed the heaviest lifting gear available to the UK rail network to restore the dignity of a TransPennine Express train near the TPE Heaton Depot in Newcastle.

A low-speed incident proved a high-profile headache for passenger operator TransPennine Express. The Scotland and north of England operator found one of their recently introduced Hitachi-built class 802 multiple units derailed nearby their Newcastle Heaton depot. The incident made the national headlines due to the extensive disruption to services caused by the derailment. However, the successful recovery operation was just as heavily covered in the national media.

Colas Rail, the specialist operator best known for extensive infrastructure support roles, was called upon to deploy their heaviest train lifting gear to rescue a stricken TransPennine Express unit off the rails in Newcastle. The derailment, on 22 March, caused widespread disruption. However, rapid deployment by Colas of the Kirow 1200 crane, the largest single lift available on the network, minimised the duration of the disruption.

“Our Kirow 1200 is a heavy-duty rail-based crane with a maximum lifting capacity of 125 tonnes and offers precision lift and carry functionality”, said a statement from Colas. “This allows our crane to lift a load and travel to the required location within a worksite.”

With the derailed unit under the wires, removing the necessary catenary to facilitate the recovery was added complication. Engineers on site were able to prepare the site for the task within three days. “Planning led by us over the week, including moving overhead line equipment and preparing outrigger bases, our team arrived with the cranes Friday morning”, said Colas. “Works successfully completed, and the line opened for train formation later that day.”

Despite its size, the versatile German-designed crane can be used for multiple tasks, including lifting track sections during replacement works, installing and removing overhead line gantries, and bridge reconstruction. As in this case, it can also be deployed on a derailment site to recover derailed traction.

The Rail Accident Investigation Branch (RAIB) is looking into the circumstances of the incident and will report in due course.