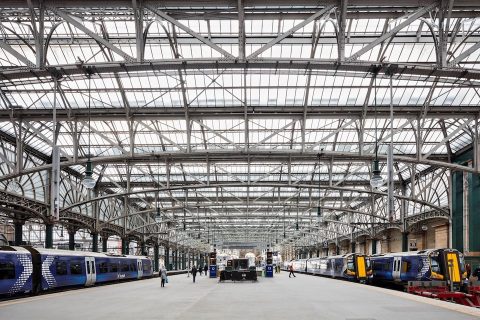 To kick-start a modern light logistics market, a back to the future approach is proposed by the UK infrastructure agency Network Rail. In a report that will be handed on to the new overarching Great British Railways organisation in 2023, NR has laid out proposals to recapture a significant proportion of the light logistics market.

The urban logistics market, which was almost entirely lost from the railways in the 1990s, is rapidly growing, and there are modern plans to make rail an attractive proposition for third-party operators. Network Rail has been looking closely at opportunities for the network to engage with a sector that was almost entirely abandoned in the aftermath of privatisation in the 1990s.

The report notes the reliance on diesel trucks for the long haul operations most suited for transfer from road to rail. Still, it also recognised the challenges posed by the historic loss of rail capacity within city-centre locations. “Space within cities for standalone storage and distribution of goods is limited due to development pressures from other uses”, says NR. The redevelopment of the once-ubiquitous city goods terminals – often into residential, office, retail and leisure destinations – reflects the desirability of those central locations. “The former extensive network of railway goods yards and depots in towns and cities has been virtually eliminated by successive post-war rationalisation”, says the report. “If the delivery of goods and services to and from highly-populated areas is to be decarbonised through greater use of rail transport in the short to medium term, the dual challenges of lack of rail access and high land values will need to be addressed”, says NR.

However, Network Rail has direct management responsibility for many of the UK’s biggest passenger terminals and says that utilising spare capacity there could be a potential answer. “The reinstatement of freight traffic to these stations would further enhance their role in the local community”, says the report. Network rail covers familiar ground in proposing to allow the movement of goods to and from city centres in varying quantities – notably individual parcels. However, the infrastructure operator has embraced modern logistics thinking by embracing trainload quantities. That has been a welcome development as far as the growing queue of would-be operators is concerned.

Combining electric trains with electric delivery vehicles and cargo bikes offers the prospect of zero-emission supply chains feeding town and city centres. “Creating a network of local first-mile / last-mile delivery services to and from stations also opens up further synergies with passenger services”, says NR. The agency says that by going ‘back to the future’ to embrace goods operations within passenger terminals will open up new business opportunities to improve the railway network overall. They say that using the same assets and operations to improve the handling of passenger luggage and the fulfilment of at-seat catering and other retail opportunities would all be possible and attractive commercial opportunities.

The latent potential of the network of stations for freight traffic needs to be considered in the context of their primary role in serving passengers, argues Network Rail. Their initial report identifies a need to develop an overall proposition for opening freight access to stations, including operating and security protocols. Their report makes several recommendations, of which one is particularly radical. They suggest the extensive undercrofts at London Waterloo, Manchester Piccadilly, Leeds and Glasgow Central stations could all be upgraded to perform a modern equivalent of their originally built purposes. Notably, some such facilities have already found new life. The former goods undercroft at London St Pancras was redeveloped to accommodate Eurostar passenger handling. In Manchester, the Mayfield terminus, adjacent to Piccadilly station, is earmarked for the city’s HS2 terminal.

Network Rail says it is now working to extend its survey to many more stations around the network. “Reinstating the capability of stations to handle parcels and other light freight traffic will further enhance their role as community hubs, helping further decarbonise the supply chain, whilst creating new opportunities for delivering products to customers”, says Network Rail in conclusion. The agency is currently disseminating the report findings across the internal organisation. Now may be the time for external stakeholders to consider opportunities for passengers and freight arising from improved delivery and servicing facilities across the network.