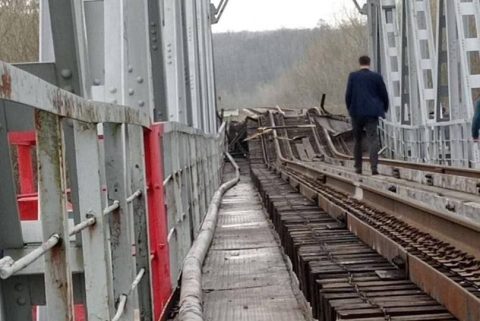 A railway bridge in the Russian city of Shebekino in the Belgorod region has been destroyed. The region’s governor Vyacheslav Gladkov confirmed the incident through his Telegram account, mentioning that “the railway bridge has been damaged, but there are no casualties”.

The railway bridge is located right next to the border with Ukraine. No scenarios have been confirmed yet concerning the cause of the damage. According to Gladkov, an investigation team is working at the site to determine the cause of the incident.

The railway line destroyed was used by a passenger train travelling between Belgorod-Nzhegol. However, the train stopped in time at the Razumnoye station, thus avoiding endangering the passengers.

Rail has played a central role in the Ukraine-Russia war. From transporting military equipment to carrying humanitarian aid and evacuating citizens from war zones. Railway infrastructure could potentially be the target of the opposing parties to hinder operations of the other side.

For instance, in late February, a report from Kiyv Independent mentioned that Ukrainian military forces had blown up the railway lines between the countries. Ukrainian Railways confirmed that the railway lines were destroyed, saying that “railroad crossings between countries that used to transport thousands of goods and bring millions of dollars to the economies of both countries have been destroyed”. Despite these statements, some operators claim that this is not the case since only small parts of the infrastructure have been damaged.