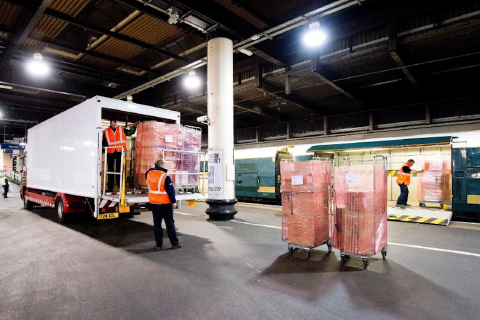 A Network Rail report casts new light on the capacity of major passenger stations to handle light logistics. A broader return to handling less than wagon load and parcels traffic has been on the agenda for some time. The concept has gained traction since the pandemic, and there is an impetus to fill the capacity abandoned by commuter traffic. The report is a concerted effort to identify broader opportunities.

Looking at almost all of the twenty major stations directly managed by the infrastructure agency, the report, subtitled “a capability review for express freight and urban logistics”, is the first comprehensive network examination. It looks for modern, fit for purpose opportunities for the rail industry to recapture a market for door-to-door delivery. That once-lucrative revenue stream was surrendered en-masse in the last decade of the twentieth century. The conclusions are encouraging for the would-be players seeking to enter the market.

Like vinyl records, light logistics never really died out. Rather like their music counterparts, parcels by rail has become a high-end, premium niche, serving discerning connoisseurs rather than the high-volume, low-margin mass market. The huge growth in passenger traffic over the past twenty years has hampered entry back into that arena, squeezing handling capacity out of the network. However, with the recovery in passenger numbers giving cause for long-term concern, Network Rail has begun a serious look at filling that gap with new revenue streams.

Established bespoke operators like InterCity RailFreight have been promoting the idea of using space at passenger terminals for some time and have been successfully operating there, almost unnoticed, for years. Network Rail has been examining a rather more conspicuous return to operations. Despite some disappointments with recent light logistics trials, there is optimism and commitment from operators eager to enter the market.

A precedent and template for goods

There seems to be enthusiasm for a mix of operations, reintroducing the tradition of a parcels car as part of a passenger service, and the running of dedicated light logistics trains in vacant passenger paths – often utilising repurposed former passenger multiple units. Big players like Rail Operations Group Orion or independent operator Varamis are already working on trains. Those models fit well with the Network Rail study. “The major stations each provide multiple platforms capable of accommodating trains with between eight and twelve vehicles”, says the initial report.

Network Rail has outlined facilities at nineteen of the twenty passenger stations it directly manages. Of their ‘Major Stations Group’ only London’s Clapham Junction is omitted. Britain’s busiest station by train movements is on the cusp of a major overhaul, which perhaps makes study in detail inappropriate. “Using much of the same infrastructure already used for resupply of passenger trains, access routes then link the platforms to road vehicle loading areas using ramps, lifts and docks”, says NR’s report. “The means of moving roll cages of goods to and from road vehicles provide a precedent and template for movement of other goods between trains and road vehicles.”

Traditionally, major stations in the UK were often co-sited with nearby goods terminals. While most of these city-centre facilities have long since been lost to redevelopment, opportunities for city-centre deliveries have not been entirely eradicated. “Some stations retain space on, above or below platform level for secure short-term storage of goods”, says Network Rail. “This space would then allow overnight deliveries by rail being taken out for final delivery during the day, bringing back outbound goods, returned items and empty equipment/packaging for the next outbound overnight rail service.”

Broadening the scope to include stations managed by train operating companies – which will likely come under the remit of the new Great British Railways – the report finds that those 2,500 other stations bring over 85 per cent of the population within five kilometres of the railway. NR says that’s well within the range of electric delivery vehicles and cargo bikes. “Given the growing interest in using the rail network for express freight and urban logistics, this network of stations, integrated with other railheads and Strategic Rail Freight Interchanges (SRFI), provide the means to best deploy rail within an overall high-speed door-to-door service.”

Recognising an expanded role for stations, NR says they represent an investment by taxpayers past and present. “Railway stations offer the potential to support the development of ever more vibrant, growing and attractive local communities. The reinstatement of freight traffic to these stations would further enhance their role in the local community. Creating a network of local “first-mile / last-mile” delivery services to and from stations also opens up further synergies with passenger services. The latent potential of the network of stations for freight traffic needs to be considered, as well as the various constraints on expanding use for freight traffic.”

The report, attributed to Network Rail’s Major Stations Group, was published in September of last year. If its conclusions are correct, then parcels and light logistics will, in every way, fit the bill nicely.