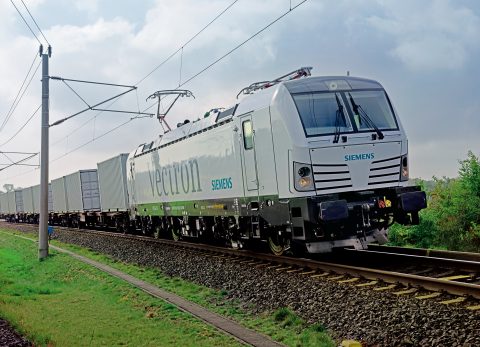 Czech rail operator České Dráhy (ČD) has received the first of ten new Vectron locomotives from Slovak leasing company RSL. The locomotive is part of a framework agreement with RSL for the full-service leasing of up to 50 Vectrons. The firm signed the initial contract in February last year, ordering an initial fleet of 13 Vectrons and receiving the first batch of six locomotives in Q1 2021.

A second batch of seven was scheduled for delivery by the end of October 2022 but this has since been upgraded to ten. The remaining nine Vectron’s from this second batch will now be delivered between June and October this year.

“They will complement other electric locomotives on various national and international routes and help us bridge the higher number of decommissioned locomotives due to the transition to the new ECM maintenance standard and ETCS installation period”, Jiří Ješeta, member of the ČD Board of Directors, said.

The new locomotives are capable of operating on 3 kilovolt DC, 25 kilovolt 50 Hz AC, and 15 kilovolt 16.7 Hz AC traction systems and are designed for operation in the Czech Republic, Hungary, Germany, Poland, Austria and Slovakia.

Developed by Siemens, the Vectron locomotive series was first introduced at the 2010 InnoTrans trade fair. It has been developed in both AC and DC electric power models as well as diesel and multi-system variants.

“The electric versions, Vectron AC, DC and MS (multisystem), let you operate in four different voltage systems, and prove themselves with pure traction and cost-efficiency. For operation on non-electrified lines and electrified lines, the Vectron Dual Mode offers a solution that is very environmentally friendly,” a spokesperson for Siemens said.

The locomotives are compatible with pan-European operation on ERTMS and also feature GSM-R radio communication. Upgrade options are available for all models to add pantographs, traction equipment, train protection system, train radio, and country-specific guidance equipment. Alongside time multiplex control, such as double traction ZDS or multiple unit ZMS, the locomotives also have the option for Austrian remote WTB technology.

ČD already operates 17 Vectron locomotives from leasing companies ELL and RSL with one locomotive owned by the carrier. The locomotives have to date mainly operated on the Berliner Prague – Berlin – Hamburg / Kiel line and the Slovácký express on the Prague – Staré Město line near Uherské Hradiště. The firm has deployed the engines via ČD Cargo its dedicated rail freight operation.

Founded in 2007, ČD Cargo is a wholly-owned subsidiary company of České Dráhy which employs nearly 7000 employees in the Czech Republic. The group is the largest Czech railway transport provider and provides an extensive range of rail freight solutions, from raw materials handling to high added value goods, transport of containers, breakbulk, and specialised transport services.