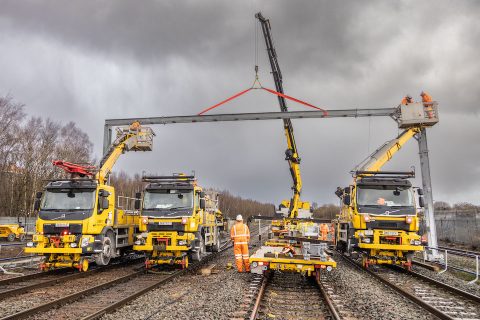 Wires up, rails down between Manchester and Stalybridge

Published on 28-02-2022 at 07:29
Engineers carrying out major rail upgrades between Manchester and Stalybridge under even greyer skiesImage Network Rail

The huge Transpennine Route Upgrade improvements programme, driven by Network Rail, continues in the Greater Manchester area. Works are underway to electrify and improve tracks between Manchester and Stalybridge. The multi-billion-pound project will see the main MAnchester – Leeds line fully electrified and bring faster, more frequent and reliable trains in the future, and will provide more capacity, potentially for freight operations. There will however be disruptions until May on this stage of the project.

Network Rail is busy installing electrification infrastructure, and renewing track and signalling equipment over the next few months. Two bridges on the route, at Southampton Street and Granville Street, both in Ashton-under-Lyne – – will also be upgraded, raising the height of both bridges to allow electric wires to pass beneath.

Frequent, faster, greener – but what about freight?

Passenger services will bear the brunt of the disruption, with the joy of rail replacement buses in frequent use. Diversionary routes may be in place for freight traffic during weekend possessions. Network Rail emphasise that further works will be needed later in the year too.

“These major upgrades will bring us another step closer to delivering a fully electrified, more modern railway for the future”, said Hannah Lomas, Principal Programme Sponsor for Network Rail. “This work is part of the multi-billion-pound Transpennine Route Upgrade which will bring more frequent, faster, greener trains.

The geography between Manchester and Leeds has always presented a challenge for railway operations. Several routes have been built in attempts to conquer the Pennine Mountain range, which divides east from west in the North of England.

Although the Transpennine Route Upgrade will greatly improve the infrastructure on the currently favoured route, there is still great anger and disappointment that the UK government scaled back plans for rail provision in the region. Most notably the recent cancellation of the dedicated high-speed line. Critics say that lack of capacity will remain an issue, and still stifle rail freight development.