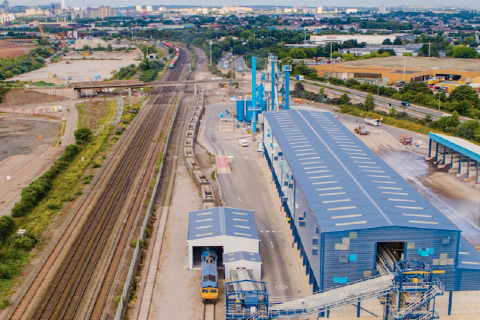 Greening the construction supply chain in the West Midlands using rail freight requires UK Government backing to unlock significant untapped potential. The region, centred on Birmingham, could be a much greater contributor to the net-zero carbon economy and help achieve legally mandated targets for the year 2050 if sufficient support is put in place. That’s according to a new report from the users and operators of rail transport in the region.

Rail based industries have joined forces to call on the UK Government for help to ensure the post-Covid recovery is more sustainable through the increased use of rail freight to supply construction in the West Midlands. Already the biggest civil engineering project in the region – the construction of the high-speed rail line, HS2, and its terminal at Curzon Street in central Birmingham – has made significant use of rail freight, and the sector at large is lobbying industry overall to adopt more rail freight as a sustainable model for the future. They cite examples such as Tarmac’s new Washwood Heath asphalt plant, where almost all traffic arrives by rail from company quarries in Leicestershire, mid-Wales and Derbyshire.

20 million tonnes and more to come

The Mineral Products Association (MPA), whose members supply 160 million tonnes of primary aggregates each year, and the Rail Freight Group (RFG), which represents the UK’s rail freight sector, have published Building better with rail freight in the West Midlands highlighting the advantages of moving materials by train. Mineral products companies currently transport up to 20 million tonnes of aggregates by rail. Still, the report explains that there is potential to do more with the support of the Government in several key areas.

“City regeneration schemes, infrastructure improvements and new homes all require large volumes of aggregates such as granite and limestone, as well as cement, to be brought in from elsewhere in the country”, says the report. “Rail freight produces 76 per cent less carbon dioxide and a fraction of the particulates compared to the equivalent road journeys. Just one ‘jumbo’ train can carry 3,600 tonnes of stone, equivalent to 125 lorries. So rail freight operators must be able to transport essential materials reliably and efficiently across the region.”

In the West Midlands, the mineral products sector has invested millions of pounds in new rail sites and improvements to their operations. The report claims that a 50 per cent increase in rail freight over the past decade has dramatically impacted heavy goods vehicles (HGV) journeys, congestion, and carbon emissions. However, says the report, to have any chance of moving towards net-zero carbon, the sector is looking to the Government to back its commitments by recognising the importance of rail in reducing emissions, then increasing capacity on the network and ensuring the costs are designed to encourage more use of rail.

The report calls for fair and affordable track charges, echoing calls from elsewhere in Europe. The report also seeks site rents, new connections, and the safeguarding of existing rail depot sites to prevent redevelopment or other incompatible developments nearby. Operators are also asking for freight to have a higher priority and greater flexibility in the timetable and a commitment from the UK Government to a programme of rail electrification so companies can align their own future investments.

“The mineral products industry is the largest user of rail freight in terms of tonnes carried”, said Robert McIlveen, MPA Director of Public Affairs. “The Government needs to recognise that these materials are vital to delivering the vision of building back better. MPA members are keen to use more rail freight because of its strengths, particularly on carbon emissions, transport efficiency, and reduced road congestion. With the new capacity released by HS2 later this decade, if we can make it easier to connect, there is lots of growth potential.”

“The West Midlands is a growing economy”, said Maggie Simpson, the RFG director-general. “Rail freight is helping to ensure that essential infrastructure can be built sustainably using low carbon logistics.  With the right policies in place, we can do more, removing HGVs off the road network and powering the construction of the railways, road, offices and new homes that the region needs to prosper.”