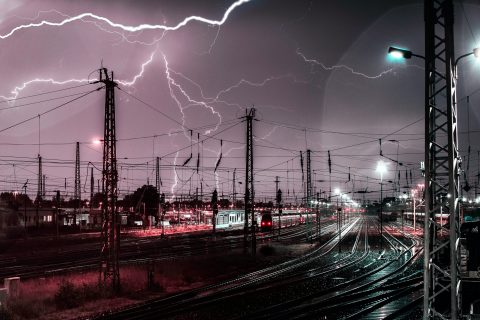 Storm damage and new wind gusts: rail freight not back to normal yet

After three storms and a persistently strong wind on Monday, railway lines in the Benelux region are still impacted by the bad weather. The complete standstill that was the case in most regions on Friday has been resolved and freight trains are running, but operations are not yet back to normal.

The elements that are in the way of seamless rail freight traffic in the Netherlands, Belgium and Germany on Monday can be summarised as damage to the overheid lines that is not yet repaired, and at the same time strong winds in the morning and afternoon, which in some cases have resulted in new closures and limitations.

In Belgium, speed restrictions will be imposed on the railway network covering the region between Brugge and the coastline. Between 12 and 5pm today, the maximum speed on these lines is 80kmph, Infrabel announces on Monday morning. This is because of a ‘code orange’ classification by the weather authorities.

“This is for example on line 51 between Brugge and Zeebrugge”, says a spokesperson of the infrastructure manager, pointing to an important railway line for freight traffic. “Also traffic coming from Germany into Flanders on the way to Zeebrugge will be affected.” This being said, the speed restriction is less of a concern for freight trains than it is for passenger trains, which run at an average speed of 120 on this network. Freight trains run a bit slower.

On the positive side, damages suffered from the storm last week no longer impact traffic on the Belgium railway network, Infrabel says. Traffic resumed on Saturday, after railway lines in the northwest had been closed on Friday afternoon. Damage to the tracks was mostly resolved on Friday night.

In the Netherlands, rail freight traffic resumed on Sunday afternoon. On Friday, railway traffic came to a complete standstill and although the storm had passed on Saturday, the damage was too much for most railway services to resume.

“All major rail freight connections in the Netherlands can be used without restrictions. The sorting process of wagon loads at Kijfhoek has also resumed”, reported DB Cargo the Netherlands on Sunday afternoon. However, seamless traffic is still a step too far. As always with rail freight, a single day of cancellations has a longer-term impact on the international timetables, as planning needs to be adjusted and capacity needs to be prioritised.

This morning, strong wind gusts are again experienced along the coast in the Netherlands. “Due to this strong wind, a large number of terminals on the Maasvlakte have stopped their activities until further notice. The RSC Rotterdam is in normal operation. The wind will decrease in the course of the afternoon and evening. This can cause disruption to train traffic”, DB Cargo the Netherlands reported.

In Germany, the infrastructure in North Rhine-Westphalia was extensively damaged. Although train traffic resumed on Sunday afternoon, it only started gradually, and many freight trains are still backlogged on the network. On Sunday afternoon, Deutsche Bahn said in reference to rail freight: “The backlog is continuously being worked off on all routes that are already open to traffic. Supply-relevant trains are prioritised.”

Germany has the added disadvantage of an already limited Infrastructure, due to the (planned) construction work on the third track. Capacity restrictions already applied at the border crossing via Emmerich, and cross-border traffic to and from the Netherlands runs mostly via Venlo. “Partly as a result of the damage caused by the storm in Germany and elsewhere in Europe, it will take some time before the train traffic is back to normal”, DB Cargo the Netherlands said.

This morning, a hurricane warning that was earlier issued was cancelled in Germany, however, the weather continues to impact traffic. Although it is not clear which freight lines are impacted, the infrastructure manager reports of several long-distance passenger lines in North Rhine-Westphalia to be closed. Line closures include those to the ports of Hamburg and Rostock, which could affect rail freight too.