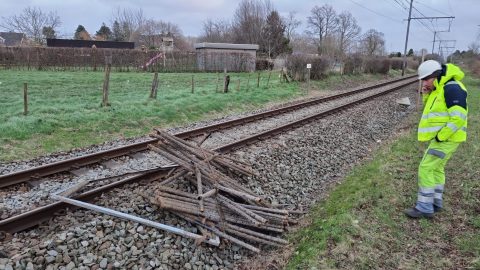 Lost your trampoline? This rail manager may have found it

After three successive storms raging over the Netherlands, Belgium and Germany, the railway tracks were all but accessible. Fallen trees were the most common object obstructing passage on the railway lines, but there were many other, more surprising things found on the network.

The respective infrastructure managers reported extensively about their cleanup over the weekend, sometimes accompanied by pictures. These are the objects we found most interesting.

Trampoline and cottage in Belgium

Infrabel, the infrastructure manager of Belgium, came across a cottage (between Jette and Opwijk), a trampoline (in Melle) and metal plates in Linkebeek (Brussels-Nijvel line) and part of a roof of a cinema complex in Sint-Niklaas (Antwerp-Ghent line) when it was cleaning up the tracks over the weekend.

“The roof of a house that threatened to blow off also disrupted traffic in Bergen. In Deux-Acres, a greenhouse box landed on the tracks. Traffic was also hampered between Tournai and Mouscron because barriers on several level crossings were torn off and blown away by the storm”, the infra manager said.

In most cases, the tracks were quickly cleared Infrabel’s technical services. The teams were kept informed in real time during the storm, so that they knew where to intervene, Infrabel explains. “In most cases this meant that the rail infrastructure could be cleared quickly and the trains could run again where possible.”

Deutsche Bahn and Prorail, the infrastructure managers of Germany and the Netherlands, mostly shared images of the rescue teams. The images show the many trees that have fallen onto catenary lines. But a ladder of an electricity post, a part of a train station and a concrete structure from an overheid line are also among the obstructions.