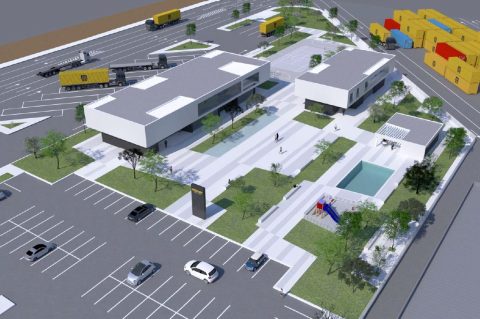 Lousado terminal, which is branded as the largest rail freight terminal ever built in the Iberian peninsula, got the needed signatures to kick off construction works. The terminal, which will be located in Vila Nova de Famalicão, Portugal, was estimated to be completed in 2022, but now it will have to wait a bit more.

MEDWAY acquired the needed signatures by the city’s council to proceed with the start of construction works last week. Earlier, in May 2021, the Portuguese environmental agency released research that concluded that the terminal’s construction would not negatively impact the environment, allowing thus the final procedures towards its foundation to continue.

The Lousado terminal project has been in the making since 2018. Its construction timeframe foresaw that it would be ready for operations in 2022; however, this is now questioned. Construction was supposed to start on Q3 2021, but it was delayed for several months, and so will its launching. Nevertheless, an important step has been made, and after 2,5 years, it is time to begin building officially.

The total investment for the project has reached 63 million euros, despite initial estimations targeting 35 million euros. “The project is extremely important for MEDWAY and the region because it will increase competitiveness and rail transport volumes, thus boosting new investments for the region north of the Douro and the Municipality of Famalicão”, commented Carlos Vasconcelos, President of MEDWAY.

In MEDWAY’s words, the Lousado Terminal “will be a state-of-the-art terminal, comparable to the most modern terminals in the world. With a direct rail connection through the Minho Line and road access via several main routes, this terminal will boost the local export industry, facilitating the logistics of its goods, thus contributing to the region’s economy and employment.

The terminal will have four 750 metres long railway lines, while it will cover an area of ​​220,000 m2 with a capacity of 11,000 TEUs. The facilities will support the storing of reefer containers, provide a designated space reserved for dangerous goods, and will also have warehousing and logistical services buildings.