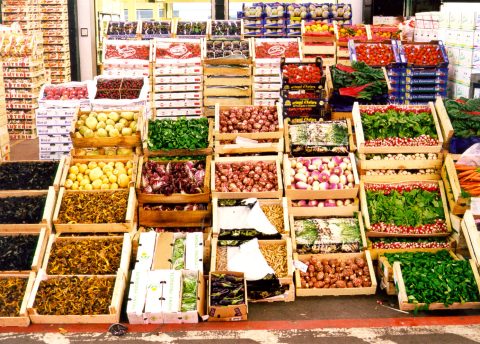 The Paris-Rungis wholesale market is eyeing significant growth in train-borne fresh fruit and vegetable shipments with the development of a 25 million euros intermodal terminal. The facility will not only serve the Rungis market, but also the economy of the entire region.

A European tender to build and operate the new terminal, which will cover an area of 130,000 sqm, closed earlier this month. The terminal is earmarked to enter service late-2024/early 2025.

In addition to a rail service which resumed last October from southern France to Rungis, provision is made to launch three routes from the new facility on a daily basis – Barcelona-Rungis-Antwerp-Rotterdam; Avignon-Dunkirk/Rungis and Dunkirk-Rungis. This would increase rail transport’s share in the supply of fresh produce to Rungis to 20 per cent and take almost 60,000 truck runs off the road, reducing CO2 emissions.

“This ambitious project is the second stage in the ‘revival’ of rail transport at Rungis, after the resumption of the train des primeurs (fresh fruit and vegetables) service last October”, Benoît Juster, executive director of Semmaris, which operates the Rungis market, told the Le Parisien newspaper.

His comments were confirmed to Railfreight.com by a company spokesperson who added that moving more perishables by rail was part of Rungis’ ongoing strategy for the decarbonisation of its activities.

The primeurs service was axed in July 2019 with the French state railways SNCF, whose freight trains operated the service, citing a lack of profitability, obsolescent rolling stock and the termination of contracts with customers.

This saw shippers turn to the road in order to move the goods. The reversed modal shift caused considerable embarrassment to the French government, which vowed to reinstate the rail service, sustainable transport being a key plank in its environmental protection programme.

Initially launched in 1986, the service operates between Perpignan at the foot of the Pyrenees on the French-Spanish border and Rungis – a distance of well over 800 kilometres. It currently operates once daily, Monday to Friday during the high season for fresh produce, which covers an eight-month period from mid-July to early October, the Semmaris spokesperson said.

Trains leave Perpignan at 4.30pm, arriving at Rungis’ current rail freight terminal in the early hours next morning. The perishables shipments are unloaded from refrigerated rail wagons pallet by pallet and then transported by truck to Rungis’ fruit and vegetable wholesalers’ facilities on-site and to other customers.

“This system is adapted to small volumes, but the time it takes to complete the handling process is significant. If we want to transport bigger volumes of perishables by train we need to opt for a genuine intermodal offering. This would see a container or road trailer loaded onto a rail wagon. Arriving at the rail terminal it would be unloaded by crane onto a truck”, Juster explained.

A single operation for a large quantity of goods would also provide scope to break even on infrastructure costs incurred in creating the new terminal.

Role of the new terminal

Semmaris is also well aware that for freight trains to be profitable they must be full on both the inbound and outward legs. Volumes of foodstuffs into Rungis would need to be complemented by manufactured goods for other clients on return journeys. The new terminal would be equipped with the necessary handling capabilities to provide a hub role while also being linked to France’s ‘rail highways’ and further afield to Europe’s mainline networks.
“The future (intermodal) terminal will not only serve the Rungis market but also the economy of the entire region”, Juster noted.

On the occasion of the reopening of the train des primeurs service last October, Semmaris president, Stéphane Layani, also highlighted the role the new intermodal terminal could play: “Goods will be able to go back and forth from Avignon to Dunkirk or Rotterdam, which will facilitate exports.”
He added: “Our wholesalers are playing the game. They know that in the future it will be more difficult to sell products if their carbon footprint is bad!”

The Semmaris spokesperson would not draw on the number of candidates who have responded to the European tender to build and operate the new intermodal terminal or their identity. The winning bid is expected to be announced during the current year, after a two-phase selection process with the future hub slated to enter service late 2024 or early 2025.