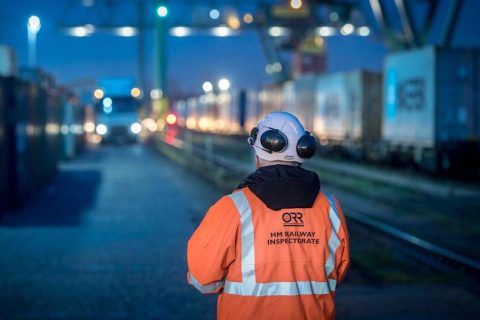 Official figures from the Office of Rail and Road point to a recovery in the rail freight sector. The latest quarterly statistics show traffic has recovered to levels seen before the onset of the pandemic. The headline measurement of total freight moved was 4.28 billion net tonne-kilometres in 2021-22 Q2. That’s an increase of 10.0 per cent compared with 2020-21 Q2. It was 0.7 per cent higher than two years ago (2019-20 Q2). The figures confirm a steep recovery, signposted in the statistics for the first quarter of this Finacial year.

Rail freight has been praised for the sector’s part in keeping Britain’s economy moving during the two years of the pandemic. However, the fear expressed by economists and analysts has been that lost traffic would not recover in the short term because of external factors. Those fears appear to be unfounded as almost all sectors have shown sustained recovery. The only downside has been a significant fall in international traffic, linked to both Covid restrictions and Brexit issues.

Coal back in traffic

Delving into the figures in detail, the ORR explains some large movements, which are down to some local factors. Coal volumes saw the biggest percentage increase compared with a year ago, rising by 60.0 per cent. “This can be explained by the resumption in the use of coal in electricity generation at West Burton and Ratcliffe power stations”, says the ORR. “Reasons behind this include low levels of wind generation and high gas prices. Furthermore, the electricity supply from France to the UK has been affected by a fire on the interconnector in Kent.” However, coal had the second-biggest percentage decrease compared with 2019-20 Q2, reducing by 13.4 per cent. This is due to the closure of most of the remaining open cast mines. 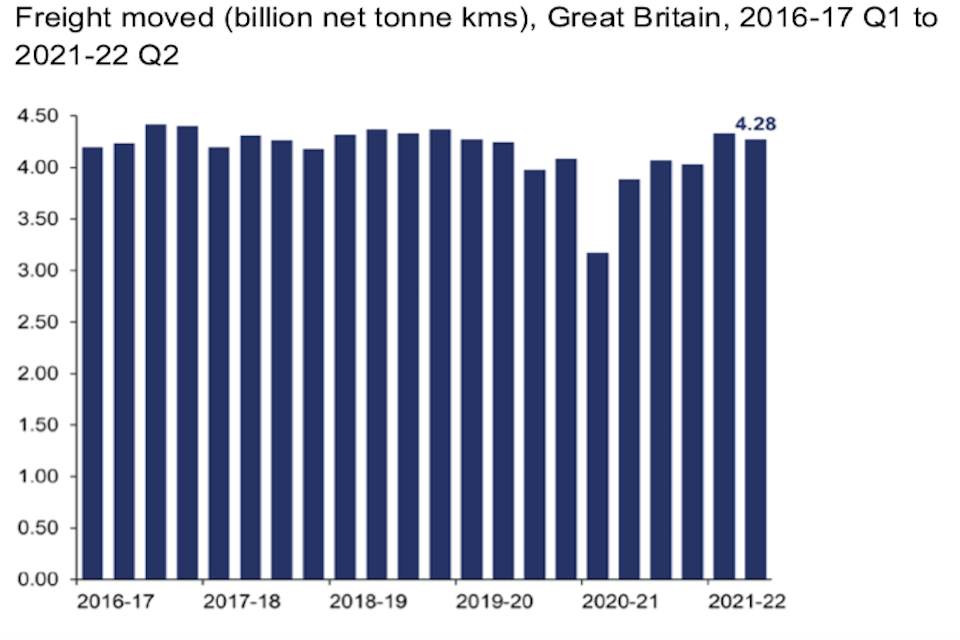 Construction volumes increased by 20.5 per cent compared with the same quarter in 2020-2. For the rail freight industry, this has been a real boost. There has been significant investment in this sector in the past three years, and there were fears that a permanent slow-down would make much of that investment unviable. However, there have been high levels of demand for aggregates from house building and infrastructure work, such as the massive London Tideway project. The initial phase of HS2 construction work has also contributed, with enabling and tunnelling works underway.

Domestic intermodal retains the largest share of freight moved at 39.4 per cent. This commodity increased by 0.6 per cent compared with 2020-21 Q2. However, it was down 3.7 per cent compared with 2019-20 Q2. Overriding factors in world trade played a huge part in this. The pandemic precipitated a global shortage of containers and indirectly caused unprecedented congestion at ports. Those factors remain unresolved and will likely be reflected in rail freight figures for some time to come. 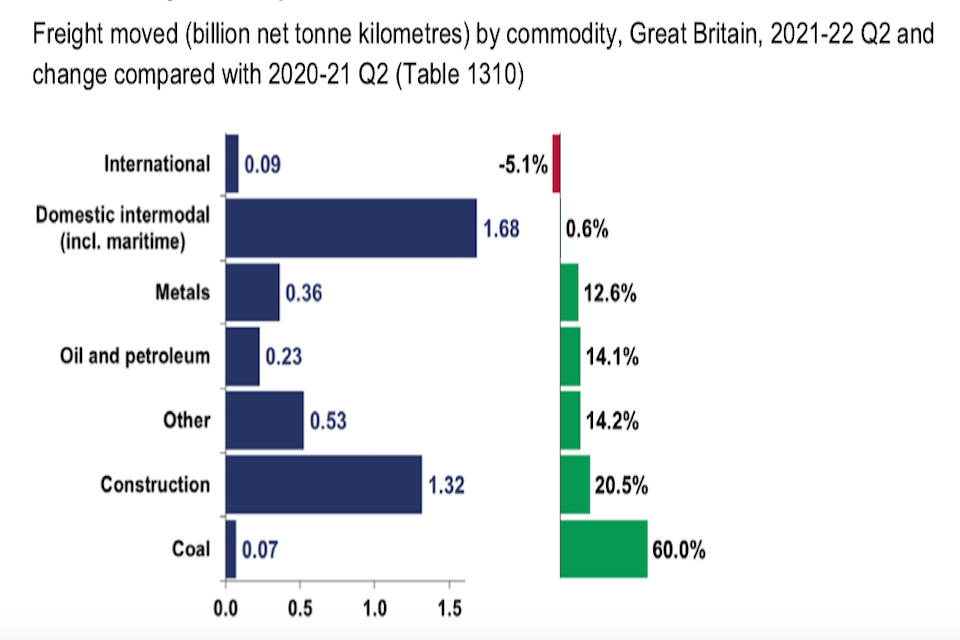 Export international intermodal was also suppressed by falling automotive traffic to Europe through the Channel Tunnel due to reduced car production and shortages of key components such as microchips. International volumes recorded the largest percentage fall compared with 2019-20 Q2, reducing by 33.7 per cent.

Unsurprisingly, delays were slightly up, given the increased volume of traffic on the UK network. However, the sector moved almost as many freight train kilometres as pre-pandemic. That measure increased by 12.6 per cent compared with the same quarter last year. In 2021-22 Q2, 8.41 million kilometres were recorded. 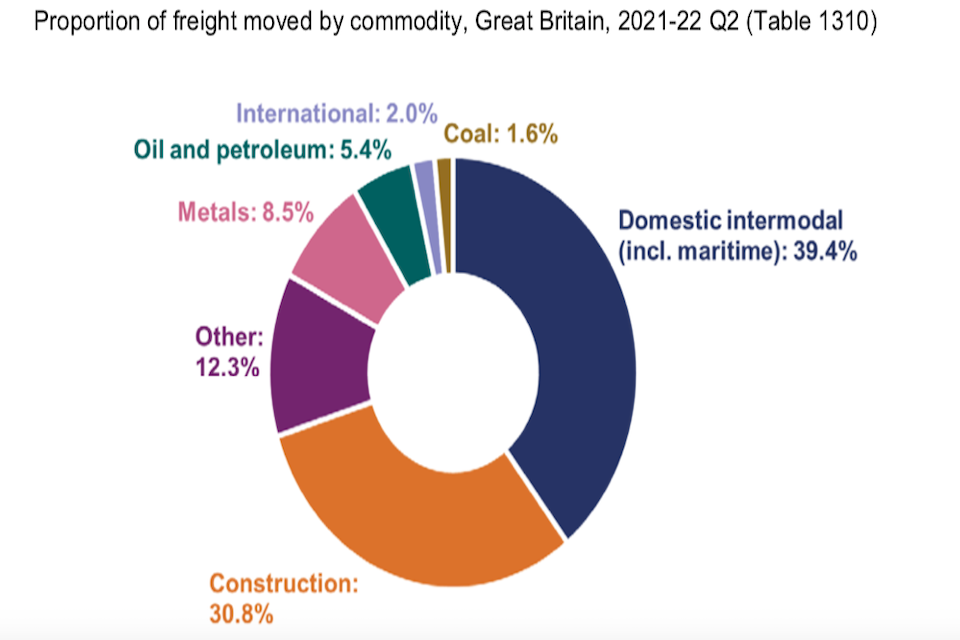 For the seven freight operators with the most train kilometres. Figures provided by the ORR show that each saw a rise in that measure compared with 2020-21 Q2. The smallest in this respect, Devon and Cornwall Railways, had the largest percentage increase with 65.9 per cent, followed by Colas Freight with a rise of 49.8 per cent. 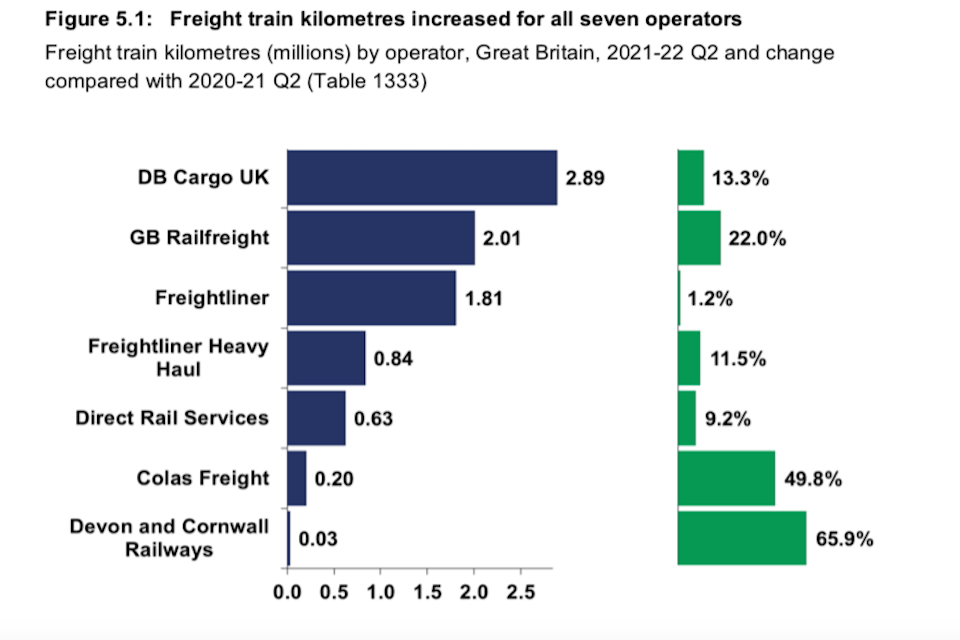 When compared with two years ago (2019-20 Q2), the two largest percentage increases were for Freightliner Heavy Haul (58.5 per cent) and Direct Rail Services (22.1 per cent). Freightliner recorded the biggest fall over the same period with a reduction of 15.9 per cent.

Graphic interpretation provided by Office of Rail and Road.