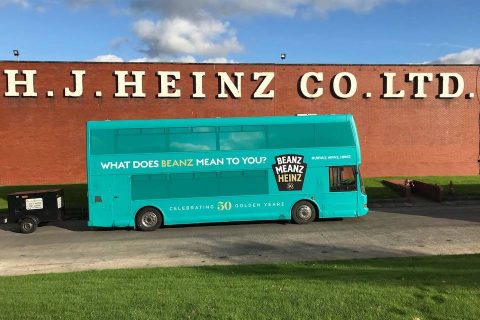 The massive Kraft Heinz factory in Wigan, northwest England, is set to add to the busy rail freight portfolio around the city. The owners are looking at exploiting the nearby rail network, which runs along the factory’s northern boundary, as a preferred method of bulk distribution. It’s a move that other manufacturers are watching closely, especially those with the railway as a neighbour. Some commentators optimistically look to this as the beginning of a wholesale rebirth of the company siding concept.

Since the merger of food giants Kraft and Heinz, the environmental issue has been moving up the corporate agenda. That enlightened policy may well be behind the proposals to connect the historic Kitt Green plant to the rail network. The factory, which has been part of the Wigan landscape for over half a century, employs over 850 people locally and is set for a massive investment programme in the coming years.

From farm to fork by rail

If there is one commodity Britain still produces in volume – it’s food. The British appetite has been satisfied by home-grown produce more than ever since the Second World War. All those foodstuffs move around the country, getting from farm to fork in various ways – and rail freight is definitely on the menu. Now, an iconic part of the British diet could be the main course in rail freight distribution.

The humble baked bean is part of the nearly 400,000 tonnes of foodstuffs manufactured every year at the Kitt Green site in Wigan, northwest England. The factory is as familiar to British TV viewers as is the product on the supermarket shelves. Taking the lion’s share of that production off the local road network is undoubtedly supported by the community. The prospect of a rail terminal featuring in the 140 million pounds (approximately 163 million euro) investment plan, announced by Kraft Heinz last summer, can only add to the stability of the plant.

Overnight operational trials have already taken place. A year ago, trains ran from the adjacent distribution centre, involving Freightliner as the carrier. The trials connected the site with the Kraft Heinz plant in Elst in the Netherlands. It formed the backbone of the Innovate UK sponsored Liverpool-Humber Optimisation of Freight Transport (LHOFT) project. Research is underway to map out the permanent rail facilities that may be accommodated and needed to serve the factory output.

“As one of the world’s largest food and beverage companies, we take seriously our responsibility to slash our environmental impact in the face of climate change,” said Kraft Heinz CEO Miguel Patricio. “Through partnerships with leading NGOs [Non-Governmental Organisations] and across our supply chain, we look to seize opportunities to reduce emissions and minimise our footprint, from the farms that grow our ingredients to the manufacturing facilities that prepare our products.”

Other sites under consideration and construction

The manufacturing plant and distribution centre lies immediately to the south of Manchester and Southport’s railway line. It is only a few minutes from the West Coast Main Line. There are various incentives available from both the government in London and the devolved governments elsewhere in the UK to establish rail connections as a means of modal shift to rail. There is an encouraging trend towards building facilities, despite high initial costs.

The pioneering connection of the Highland Spring mineral water plant at Blackford in Stirlingshire, Scotland, is Prominent among schemes underway. The plant lies alongside the Stirling – Perth mainline, and the facility, with twin sidings, will relieve the village of much of the stream of heavy goods vehicle movements that currently serve the plant. While a cool drink of Scottish mineral water will soon be loading up, hopes are high that Kraft Heinz can quickly follow suit and, as the adverts almost used to say, Beanz meanz … railz.