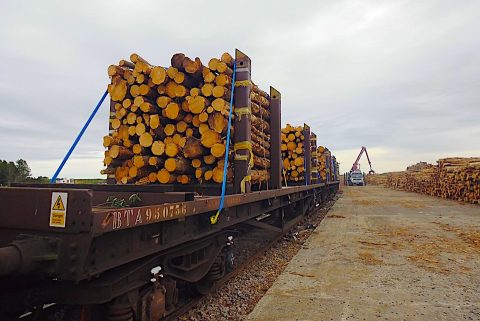 The concerted return of timber by rail in Scotland has taken further root. Approval has been granted from a local authority to establish a new terminal in the north of the country. The modest facility will operate from a line side installation near the remote station at Altnabreac on the Far North Line – the single track ribbon which connects the principal settlement of Inverness with the towns of Thurso and Wick.

Observers have welcomed the news that timber operations by rail have been given further approval by Highland Council, the local authority for much of the north of Scotland. Bulk freight operations by rail would be environmentally beneficial to the fragile infrastructure of the region and help safeguard the railway line, which connects many remote settlements to the network.

Following on from successful trials in the summer, a collaborative effort has been underway to find a longer-term solution to moving vast timber reserves from the north of Scotland to processing plants and markets further south. The initial trials were run for six weeks and moved timber from an existing railhead at Georgemas Junction to a processing mill near Inverness. This new project seeks to establish a purpose-built facility at Altnabreac, a remote passenger station about 20 miles (32 km) further south, currently serving a tiny and isolated community, deep within vast tracts of managed forest plantations.

The proposals are for a simple lineside facility that will allow raw timber to be transferred from plantation harvesting tractors directly onto waiting trains. There are no plans for sidings – the trains will wait on the line while loading. The tiny volume of passenger traffic makes this technique viable. It also keeps down the overall cost of installation. As a bonus, the additional traffic helps safeguard the line’s future, which is constantly under threat due to low patronage. The main road between Inverness and Wick and Thurso has been heavily invested and offers much shorter journey times. However, forest plantations are routinely 10-30 miles (16 – 54 km) distant and only connected by narrow rural byways.

Local print media says the report, presented by Caledonia Forest Land Investment Ltd, the land and timber owners, asked for permission to establish a facility at Altnabreac for an initial demonstration project which would remove around 9000 tonnes of timber to a plant at Inverness. Emphasising the environmental benefits, the report noted the unsuitability of the alternatives. “The existing route for the site is the unclassified road between Strathmore and Westerdale and then the B870 to Spittal before joining the A9”, it noted. “This route has significant structural issues and moving the timber haulage to rail will bring significant benefits for the Highland Council as roads authority and other road users.”

Modal shift to rail is a key political aim. The Scottish government has already allocated funds to timber by rail projects to revive flows that have been dormant for over ten years. With several Scottish plantations reaching maturity, there is expected to be increased supply from forest harvests. With the political and climate agenda moving steadily towards low-carbon operations, the opportunities for rail freight operations are firmly taking root.