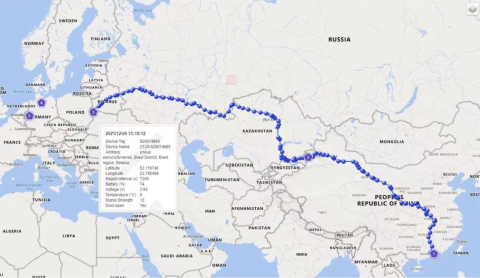 A new rail freight service has been launched from Guangzhou on the southeast coast of China, to the main port of Germany: Hamburg. The first train has just arrived in the German port, and the second one is already on the way. This line will remain in the timetables, says Yacky Jan from NSR Intermodal, the Chinese logistics firm offering the service.

The train also stops in Malaszewicze, Duisburg and Hamburg on the way. The transit time to reach the Polish border city is fifteen days. After that, it takes around two days two reach the final destination. In case of the first train: it arrived in Malaszewicze on 19 December, and on 20 December the remaining cargo continued to the German hubs, Yan explains.

Rail from the east coast

The service, which is operated by Far East Land Bridge (FELB), is the first to run from the coastal city. Traditionally, cargo is shipped either by sea, or by rail but via the nearby hub of Xiamen. Although sea shipping is a logical and well-established transport mode on the east coast, the popularity of rail is rising. Rail is faster, and with the current rate increase of sea shipping, rail is increasing in competitiveness.

From February onwards, the frequency of the service is planned to increase. “With weekly fixed slots( means minimum delay at origin terminal) and great support from our partner FELB, we aim to achieve stable and fast transit time, and will continue to expand the service offering from once per week in January (each Saturday) to 6-8x trains per month in upcoming 2-3 months”, Yan informs.