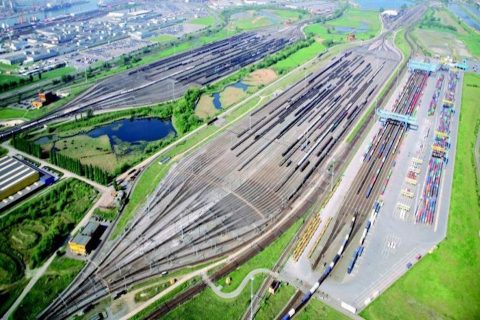 The construction work on the German railway, which has been affecting train traffic for weeks, is now also having an impact on chemical production in Antwerp. Because train transport has come to a standstill, some chemical companies have already had to reduce their production. Lineas even sees that customers are forced to take the truck.

This week at the Combinant rail terminal, it could already be seen: containers piling up due to the capacity problems on the German railways. Due to the many activities on the German network, fewer trains are operated and many containers remain in the port. This now also has an impact on the chemical cluster in Antwerp.

Gert Verreth, spokesperson for Essenscia, the sector organisation of the chemical sector in Belgian, told De Tijd that some companies had to reduce their production due to delayed transport by train. Some chemical products may only be transported by rail, which means that there are no alternative modalities. “And chemical transport by rail is crucial in companies that work just-in-time”, says Verreth.

17 trains stop at the border

Rail operator Lineas confirms that there are logistical problems with its customers. “Obviously, this situation weighs on our reputation and on the freight rail industry in general. Companies that are already struggling with their supply chains as a result of the Covid-19 pandemic, see their inbound and outbound flows of goods disrupted and in a number of cases are forced to return to truck transport”, said spokesman Peter Dercon. He warns of the risks of a ‘reverse modal shift’.

Lineas CEO Geert Pauwels discussed the problems with the German rail infrastructure manager earlier this month in the Frankfurter Allgemeine Zeitung (FAZ). “At one point we had 17 trains standing still between Liège and Aachen.” In the same article, Sven Flore, director of the freight division of the Swiss railway company SBB, even speaks of an ‘absolute catastrophe’.

The German rail network is considered the backbone of the European rail freight network, countless freight routes run through the country. “In recent weeks we have been confronted with an unprecedented number of infrastructure works on the German network, which made traffic to and from Germany enormously difficult”, said the spokesperson for Lineas, who speaks of “poor planning of the works and  communication by DB Netz”.

The German rail network is also essential for Lineas’s operations. “For our country, the connection to the Ruhr area and the Rhine-Alpine corridor between North Rhine-Westphalia and northern Italy are of particular importance.” Lineas runs 300 trains a week, the majority of which go to or via Germany.