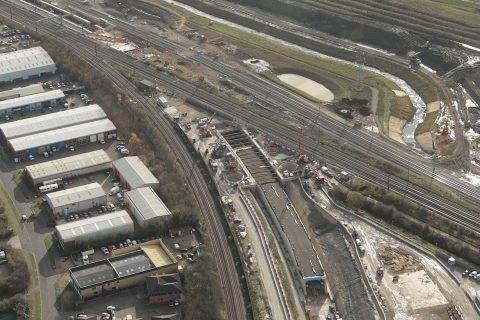 Who will actually use the new Werrington Tunnel?

The UK government made much political capital out of a stage-managed opening of the dive-under tunnel at Werrington near Peterborough last week. The structure, which allows traffic to pass under the East Coast Main Line, will improve capacity and avoid conflicts between freight traffic heading for the ports and express passenger traffic heading for Scotland.

Werrington Tunnel has been on the RailFreight.com agenda throughout the construction and commissioning programme. The engineering challenges have been immense. Now that the uniquely installed structure has had its opening made official by a much-covered government photocall, it is time to consider the operational benefits of the much-applauded engineering feat.

The engineering needed to install the tunnel saw a UK-first, as the 11,000-tonne curved concrete tunnel was slid into place under the existing railway in January this year. The ‘curved box’ was built next to the East Coast Main Line in nine interconnected sections. The structure is 155 metres long, 9,5 metres wide, and 5,1 metres high, with one-metre thick walls.

“The Werrington tunnel will crucially unlock much-needed extra capacity on the network for freight services”, said John Smith, the CEO of GB Railfreight, who have their regional headquarters nearby. “This is an important investment by the government and furthers our industry’s efforts to create a more efficient supply chain across the UK, whilst making crucial environmental and regional investment progress at the same time.”

Benefits for the entire freight sector

Werrington allows freight traffic to access the alternative north-south route – often called the Cathedrals Route, for its alignment, which takes it through the historic ‘cathedral’ cities of Lincoln and Gainsborough. South of Peterborough, existing grade separation allows access to Ely and significant freight traffic hubs, including the Port of Felixstowe. With every operator of note already using the port, Werrington has direct benefits for the entire freight sector.

Benefitting port traffic means the project ties into the broader reorganisation of tracks around Ely. That’s a source of pride for Rob McIntosh, the managing director for Network Rail’s Eastern Region. “From building the huge concrete tunnel onsite next to the East Coast Main Line to pushing it into place in a UK first for engineering, it’s been amazing to see the progress our teams have made on this ground-breaking project”, he said. “London, Peterborough, the north of England and Scotland will benefit from faster, more reliable journeys as longer freight trains can now dive underneath the famous passenger route.”