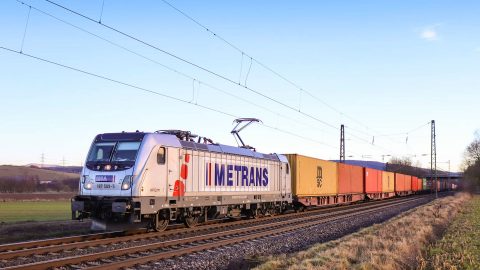 METRANS: our German network is growing

METRANS gets also Germany covered. “Our network there is still growing, also in Germany”, said Petr Lanka, CCO at the intermodal operator. The latest addition was the terminal of Gernsheim last year. But this does not mean that there is nothing on the wish list of the HHLA subsidiary.

METRANS is the freight operating division of the Hamburg-based group HHLA. Czech Republic is its homebase, although the network now expands all over Europe and the main hubs are located outside of Germany. But it is fair to say that Germany represents a good share of the network.

In 2020, Gernheim was added as an end terminal within the network. This German city lies in the south west of the country, north of Munich and south of Duisburg. “There wasn’t any terminal in this area, therefore METRANS decided to establish these connections, to this terminal. It especially caters to an active chemical industry”, Lanka says.

The METRANS network in Germany now counts eight bases from where the trains are starting and heading to: Hamburg, Bremerhaven, as ports, but also points for the continental traffic, Duisburg, Leipzig, Berlin, Nürnberg, Munich and Gernsheim. “We operate 3 trains per week in both directions between Hamburg and Gernsheim. This may be increased to 5 departures early next year. We also have good cooperation with the barge side of the terminal, which is by the way trimodal.”

Now that all these cities are connected to each other, and to other hubs in Europe, METRANS will focus on increasing the volumes, with more connections, to be faster more reliable, more effective. “There is still much to gain. We can for example explore the connections to new cities, which we have not developed yet. It´s the right time to do so.”

In total, METRANS operates 5 hub terminals, 12 inland terminals and depots and more than 550 regular train connections per week. It is currently constructing a new terminal in the Hungarian city of Zalaegerszeg, which, the first phase of it, will open in 2023.

It also recently opened a new railway line between Hungary and Romania. Since October, a blocktrain moves three days per week between Budapest and Arad, in both directions. For this service, METRANS partnered up with the Afluent terminal in Arad, on the border with Hungary.