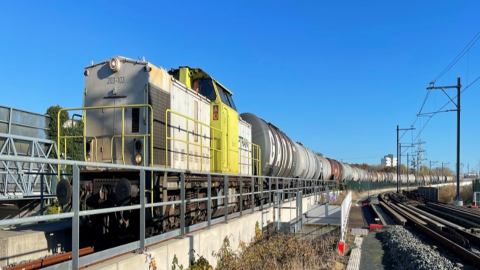 Not enough tracks? This Dutch freight train runs on a metro line

For the first time in the Netherlands, a freight train ran on a metro rail track. Specifically, this metro line is the Hoekse Lijn between Schiedam and the Vulkaanhaven industrial site near Rotterdam. This is not a one-time event, since as ProRail announced, freight trains will start running frequently in the metro route.

The Hoekse Lijn used to be a fright train route running between Schiedam and Hoek van Holland. In 2017 it was excluded from the Dutch railway network. Since then, ProRail, the Dutch infrastructure manager, sold the line to Rotterdam’s transport company RET that started operating it as a metro line in 2019. The initial transaction between the two companies included the line’s use also by freight trains, who now finally return to it.

The first train will be the starting point for more to come. Specifically, in 2022, ProRail and RET plan to run three weekly trains via the Hoekse Lijn and enhance rail freight connectivity in the industrial area surrounding it again. “You now have an industrial area with a railway. ProRail and RET had to work together to achieve stable operation of the line. It took a while, but in the end, we came to a good solution,” commented Kees van Dongen, project manager at ProRail.

A freight train running on a metro line sounds like an impressive achievement. Not only because it re-establishes freight flows that have been long lost, but because it involves many technical challenges that have been overcome by the parties involved. For instance, since the tracks do not belong to ProRail’s network, trains crossing them need to cross a regional border literally.

“Because the Hoekse Lijn is managed by RET, and not by ProRail, that stretch of track is a kind of foreign enclave for us. A freight train that first runs on the main network and then on the local network of RET actually crosses a border. That limit has to do with, among other things, the differences in catenary voltage, the protection system and traffic control,” clarified van Dongen.

How does it work technically?

Both ProRail and RET consider this development a technical and administrative success determined by hard work and good cooperation. How does this network crossing work in practice, though? When a train reaches or leaves ProRail’s premises, traffic control is handed to RET or vice versa. Specifically, when a freight train wants to enter the metro line, the driver calls RET traffic control. Subsequently, RET makes sure that the metro tracks are cleared from traffic and grants access to the freight train.

Because the concept is entirely new and has much potential, the two companies will closely monitor its function for a year. “The control posts have been instructed nicely on the operations and coordinate effectively. However, we want to make sure that all traffic control posts work effectively together. Thus, we will monitor their operations for a year to ensure that everything works properly,” concluded Ilse Oldenburger, traffic control manager at ProRail in the Randstad south region.

Sounds a bit like the CarGoTram in Dresden, Germany.

Not really, as the CargoTram has dedicated rolling stock, but it is a conventional freight train with locomotive and wagons.