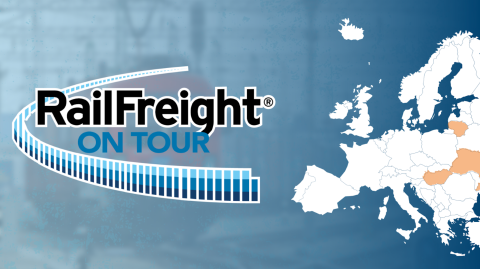 RailFreight.com is going on tour

Last week, we revealed a new concept: RailFreight on Tour. Every year, we will visit several rail freight hubs to strike down with a local edition of the rail freight summit. Next year, we are visiting Vilnius (Lithuania), Lviv (Ukraine) and Debrecen (Hungary).

The RailFreight on Tour concept was revealed during a special webinar last Friday. ‘A traveling circus’, as it is called by initiator Rob Vos, ‘that relies on the support of local communities’. During the same webinar the complete event agenda of RailFreight.com was announced. 2022 will be an exciting year with a total of six events. 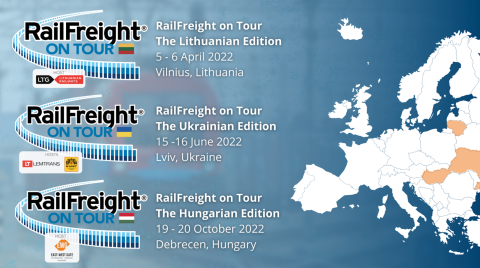 The idea of RailFreight on Tour was born when Vos, who is the business unit manager of the RailFreight team, was reminiscing about the success of the RailFreight Summit that celebrated its 5th edition this year. “We really built a local community there. This is something we can do in other places too.”

The RailFreight team then made a list of places that are relevant for the rail freight industry, and asked around if there were local parties interested in being involved as hosting partners. “The response was overwhelmingly positive. There were many interested parties, more than we could even expect. The year of 2022 filled up quickly, and we have already started planning for 2023, and in some cases 2024. It is a huge success!”

The first place to visit is Vilnius in Lithuania, where RailFreight on Tour is organised on 5 & 6 April, in partnership with LTG Railways. “A lot is happening in Lithuania at the moment. It is an upcoming market with a lot of potential, due to its location but also due to its developments”, said Nikos Papatolios, who is currently working on the programme of the event.

“The modal split of rail reaches almost 70 per cent in Lithuania”, said Gytis Mažeika, director, development and international cooperation at the Lithuanian ministry of Transport and Communications during the webinar. This positions the country among the leading European states in using rail freight. Even countries like Germany, which are considered traditional rail freight forces, come second to Lithuania. Read more here.

On 15 & 16 June, the tour moves the Ukrainian city of Lviv. Here, RailFreight.com co-hosts the event with N’Unit and Lemtrans, two companies that are currently working on a new terminal in Mostyska, on the border with Poland. During the summit, particpants will be taken on a site tour to visit this terminal.

During the webinar, Volodymyr Demenko from Lemtrans revealed that the terminal would be opened in Spring 2022, for the first phase at least. By that time, it will have a capacity of 100,000 TEU, both track gauges and 36.5 hectares of land. From there, it will be further expanded. The terminal serves traffic to and from Europe, but also transit traffic to and from China.

The last stop in 2022 will be in Debrecen, Hungary. On 19 & 20 October, the On Tour summit is organised there together with East West Gate, the operators of a new terminal on the border with Ukraine. Debrecen lies only 100km away from Fenyestlitke, where this terminal is situated, and of course a site visit will be organised.

This terminal is placing Hungary back on the map, the company claims. Adam Talosi, who is a member of the board of the company, explained during the webinar that this area is an important place for transit traffic between Europe and China. “With this terminal, the company will facilitate this transit traffic.” In a video shown during the webinar, one can see how the cranes of Kunz have just been delivered to the site, while another video shows how a warehouse is being erected. The terminal will be opened for traffic in Spring 2022.

Apart from the new event concept RailFreight on Tour, RailFreight.com continues to organise its yearly returning events. The first to come up in 2022 is the Track Access Charges Summit, a real industry event for all those who are concerned with the charging mechanisms of railway. This will be held on 20-21 April in Riga, Latvia, in cooperation with LatrailNet.

The RailFreight Summit Poland will take place in the Polish capital of Warsaw next year, on 7 & 8 September. This will be the 6th edition of the yearly returning event, where the focus lies on the Central and Eastern European region. 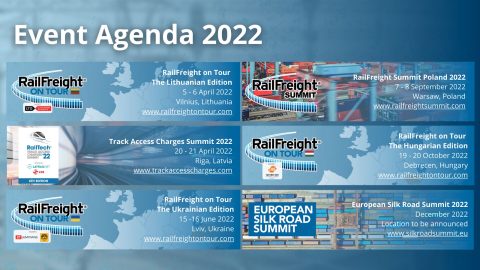 Do you want to be part?

Do you want to be part of our tour? Or of any event? If you want to propose a RailFreight on Tour event in your city, you can contact Rob Vos. You can also travel along as a participant, by purchasing a combi ticket. More information about this will appear as soon as the registration opens. Also have a look at our event page.

You can watch the webinar below: