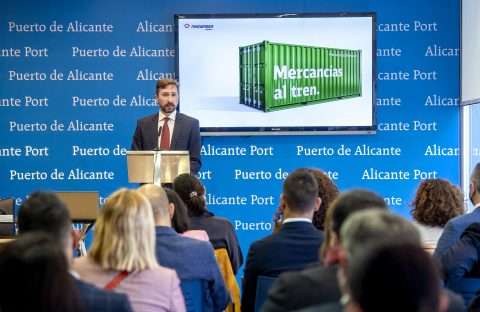 Spanish fruits and vegetables on the train to London

A new direct railway line has been opened between the Spanish port of Alicante and London. The Alicante-London Bridge, as the service is called, assures shipments between the cities in 72 hours. It is organised by Terminales Marítimas del Sureste together with Transfesa Logistics.

The first train left the Spanish port in the last week of October, and has already returned to Alicante. The second train departed on Friday 5 November, committing to its initial timetable of one service per week in both directions.

Noteworthy is the type of shipments; according to Transfessa Logistics the train left with 90 per cent of refrigerated products and another 10 per cent of dry cargo. The south-eastern region of Spain is known for its export of fresh fruits and vegetables, and lately, more of these products find their way to the train.

What makes the service more relevant is the clear shift to rail. Exports are still dominantly carried out over the road, but this service shows that rail freight is an option too. The train makes use of the Mediterranean Corridor, which connects the east coast of Spain to France. Here, it connects to the North Sea Mediterranean Corridor, which leads to the Channel Tunnel and ultimately links to the UK.

Commitment to the Mediterranean Corridor

The director of the Alicante Port Authority, Carlos Eleno, explained that this journey is another step in the commitment to the Mediterranean Corridor. “This commitment to the train and the service that is launched today, is the best example”, he said at the official launching ceremony on Friday.

“The private sector has already taken the first step, but now more than ever we need public administrations to accelerate and complete the pending actions on the corridor as soon as possible: a third line, sidings, electrification of the branch line to the port, etc.”. The Mediterranean Corridor is an essential link for Spanish traders to the rest of Europe, and the development is there, but slow. The industry has complained for years about the pace of completion.

The director of the Transfesa Logistics Transport Division, Samuel Nevado, highlighted the importance of making the railway known, as it is a relevant line to both the automotive industry and the fruit and vegetable sector, with very similar characteristics in delivery times.

“This new train is a perfect complement for the exporting, importing and transport companies that currently operate between the southeast of Spain and the United Kingdom”, added the director of Terminales Marítimas del Sureste in Alicante, Jesús Aznar.