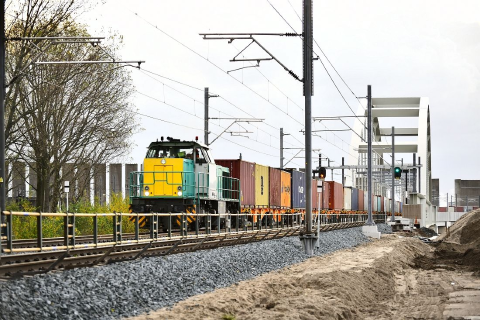 The Theemsweg route in the port of Rotterdam is now connected to the existing Harbour Line. On Monday morning 8 November 5 am, the first freight train ran on the four-kilometer-long track. According to the Port Authority, time savings, greater rail capacity and better accessibility are the advantages of the 300 million euro structure.

The six-day closure of the Harbour Line that was necessary for this has now come to an end. Rail freight traffic to and from the port of Rotterdam can be resumed, although it will take another week before all is back to normal. Train traffic will be built up to regular levels now, according to ProRail.

The Theemsweg route replaced the Caland Bridge, which opened for ships several times per day. The new structure consists of a viaduct and two bridges, so that rail freight is not impacted by barge. The projected benefit is an increase of rail capacity from 90 to 230 trains per day.

The Theemsweg route runs from Merseyweg, on a railway viaduct alongside Theemsweg, all the way up to Moezelweg via Neckarweg. The railway line passes two arched bridges (near the Thomassen Tunnel and the Rozenburg Lock) and links up again with the existing track where it meets the A15 motorway.

The project had a long run. Preparatory work started in 2016. A year later, in 2017, the cycle path was relocated. In 2018, the bridge was raised ten meters and part of the concrete windshields were removed and replaced in a different location. Sound-proof walls of 1.70 meters were also installed to dampen the noise of the trains racing by as much as possible.