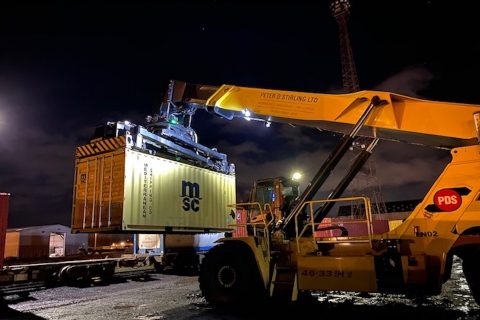 Mossend Rail Terminal – in development as Mossend International Railfreight Park – is to host Low Carbon Logistics, a three-day conference claimed to be the first event of its kind in Scotland. The aim is to raise the profile and awareness of how the low carbon transition will work in the rail and road freight sectors. The organisers call the event a unique opportunity to celebrate innovation and promote the importance of pulling together for net-zero.

Staged during the COP26 climate change meeting – being held just twenty miles along the West Coast Main Line in Glasgow – the Mossend Low Carbon Logistics event organisers say they intend to bring together the industry and to demonstrate to world leaders that the UK rail freight industry has embraced the low carbon economy and is leading the way. The event runs between 8-10 November 2021.

Rail freight hosting its own response

The UK government and the devolved governments in Northern Ireland, Wales, and Scotland encourage industry to decarbonise. Legislation has been passed that commits the UK to a net-zero carbon economy by 2050. Rail freight has been targeted as a key sector, leading the way for the rest of the industry. Already the sector has been responding vigorously.

The UK hosts the 26th UN Climate Change Conference of the Parties (COP26) in Glasgow from 31 October to 12 November 2021. The rail freight industry has taken the opportunity to host its own response, just fifteen miles away (24km), at Mossend. As part of the programme for COP26, the Low Carbon Logistics event has been developed by Mossend International Railfreight Park, Scottish Enterprise, Network Rail, Transport Scotland and the logistics operators PD. Stirling, to showcase their support of the Scottish and UK Government’s vision for a zero-carbon supply chain network and a more competitive and efficient road and rail freight sector.

COP26 delegates, potential investors, potential future customers and supply chain representatives are being invited to attend. Centred around the naming of electric and sustainable fuel locomotives, the event will raise the profile and awareness of the freight sector’s low carbon transition. Affording numerous trade and innovation opportunities.

“Providing a platform to explore how supply chains can become more sustainable within the freight industry, there is an exciting programme of seminars, exhibitions and ceremonies”, says a statement from the organisers. Special exhibition tracks have been laid on the site of MIRP, which is currently under construction.

Alongside a programme of lectures and seminars, there are three naming ceremonies for partner rail freight operators. On the first day, GB Railfreight will name a class 92 Electric Locomotive. These are currently the most powerful locomotives in the UK and can work all over the electrified network – both overhead and third-rail systems. They are also capable of operating through the Channel Tunnel into France. Details have not been released, but the name will reflect “a strong local flavour to the Central belt of Scotland”, say the organisers.

On Tuesday, DB Cargo will name a class 90 Electric Locomotive “The Chartered Institute of Logistics and Transport”. This locomotive, 90039, already carries the striking “I am the Backbone” special livery. On Wednesday, Direct Rail Services will rename a repurposed class 68 diesel locomotive. The unit has been upgraded to run on hydro-treated vegetable oil – HVO Fuel. In the future. Compared to its native diesel, it will be 90 per cent lower in terms of CO2 emitted.

That should catch the eye of the  COP26 delegates who make their way to Mossend’s Low Carbon Logistics conference. It’s an easy trip between the Conference Centre station and nearby Bellshill station … assuming the long-running pay dispute on the Scottish rail network can be resolved, and a planned strike averted. Right now, the only climate that is refusing to warm up is the industrial relations one.

As a developer, you must be familiar with the concept of stack – an arrangement of technologies that form the underlying hosting solution.