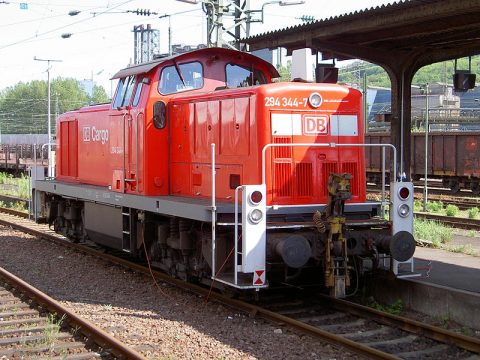 DB Cargo is going to fully automate the activities of shunting locomotives in its train formation facilities. This is to further boost single wagonload traffic throughout Germany. The German operator has contracted Railergy to implement the automation.

DB Cargo AG operates single wagonload traffic throughout Germany. Single wagon transport is characterised by the coupling and uncoupling of individual wagons or groups of wagons at hubs (train formation facilities) within Germany. In order to make this more efficient, process automation is a key solution, it states.

It has planned several measures which, when combined, will make rail freight transport more competitive. One important element of the strategy is to fully automate the activities of shunting locomotives in the train formation facilities (ZBA) of DB Cargo.

For this purpose, it is necessary to evolve the existing semi-automatic shunting system from the sequence interlocking to full automation of all process steps. In addition, the vehicle must be equipped with sensor and safety technology, which must prevent additional hazards for people and equipment.

In addition, other simple activities related to shunting (pushing to one side, clearing stationary tracks, pulling up false runners, shunting past the hill) are carried out by the shunting locomotive and are thus to be seen within the automation task area.

The aim is to develop a GoA4 (Grade of Automation) system as a retrofit solution so that the prerequisites for installation on various locomotive series are fulfilled, and later extensions are possible for further shunting operations, for instance also in terminals and ports.

By the end of 2024, commercial operational testing and approval are to be achieved at the ZBA Munich-North. The trial will initially be carried out on an existing class 296 locomotive. Approval for GoA4 operation is expected to be implemented on a modern hybrid locomotive.

The Augsburg-based company Railergy brings many years of experience in the fields of retrofitting onboard systems as well as positioning and remote control. The company has developed a customised and comprehensive concept for the development, testing and approval of the locomotive component.

Railergy has a modular retrofit TCMS for existing vehicles in its range, which makes it possible to also equip old locomotives and railcars with interfaces for ATO, ETCS and other digital systems. The first remote control solution via 5G was developed with Thales Germany.

The most important functions of the locomotive component are the determination of the locomotive’s position in the marshalling yard, the precise control of drive and brakes, the safe monitoring of speed and operating range, and the safe detection of obstacles and signals.

An innovative system is used to determine the locomotive’s position without trackside installations such as balises. By constantly comparing the vehicle’s position changes, which are determined by an IMU, with the precise infrastructure map and known landmarks (such as signals and buildings), a relatively coarse (approx. 3m) but reliable positioning is achieved. The system is supplemented by precise positioning via GNSS (accuracy approx. 0.5m). While the safe position is used for train protection, the exact position is used for fine control.

Obstacle and signal detection works according to the same concept: objects can be reliably detected using safe and approvable measurement and evaluation procedures (without artificial intelligence). This always ensures safe operation. To increase productivity, an AI-based system is used in parallel.

By continuously monitoring the AI-based functionality via the safe object detection, approvability is achieved. At the same time, there is scope to develop innovative validation and testing procedures for the AI parts of the software as well. Up to now, no recognised approval processes have been available for such applications.