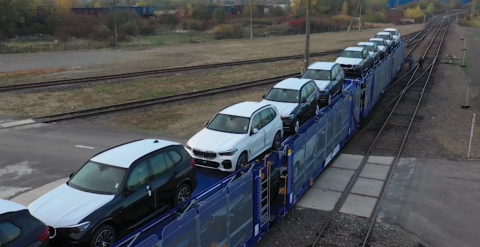 Pacobo and Hoedlmayr have jointly launched a new pilot train carrying finished vehicles from the German Bremerhaven Port to Chop in Ukraine. Chop lies on the border with Slovakia and Hungary, an upcoming automotive industry region. Ukraine itself is a stable finished vehicle market.

“In close cooperation with our excellent partner Hoedlmayr we have delivered the pilot train of the new railway connection between Bremerhaven Port and Chop, Ukraine”, writes Gabriel Palko from Pacobo. The train journey took three days. The pilot train carried 207 BMW automobiles.

According to the partners, the shuttle between Bremerhaven and Chop is offering a new, marketable and fast transportation solution for the Ukrainian finished vehicle market. “The three days transit time is a strong alternative against sea transportation, while the 200+ cars loading factor is highly above the road carrier capacities”, said Palko.

Both companies have solid experience with the transportation of vehicles by rail. The Austrian-based Hoedlmayr started transporting vehicles in 1961, and has since then developed it as a core business. ​​Its first vehicle transports to Ukraine and Russia commenced between 2002-2008. Pacobo is a Ukraine-based logistics company that includes vehicle transportation among its services.

The Ukrainian vehicle market is quite stable. It saw a slight drop in 2020 of 3.2 per cent despite the pandemic. Full-Year sales amounted to 85.450 units. Before the pandemic, the market had been on the rise since 2016.