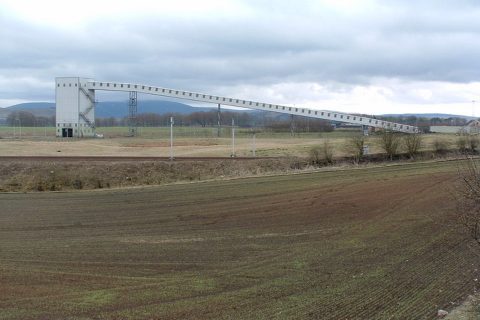 Multi-sector land and property developer Hargreaves Land has announced the sale of Ravenstruther Rail Terminal, a former coal loading terminal on the West Coast Main Line (WCML), between Carstairs and Motherwell in Scotland. The horseshoe-shaped terminal, adjacent to the town of Lanark in South Lanarkshire, has been sold to the aggregates supplier, Cloburn Quarry Company Limited. The new owners intend to use the facility to serve their customers all over Great Britain, with the potential for overseas export. The quarry site is one of the UK’s best-known sources of granite railway ballast.

The outright purchase of the rail terminal follows the leasehold deal announced between the two parties in early 2020. Cloburn became the site’s tenant as part of its plans to commence distribution via rail to service its customers throughout the UK and Europe. The site’s future has been secured as Cloburn looks to invest in its operations to meet the demand for red granite aggregate products extracted from the nearby quarry.

Successful trials involving a test locomotive, supplied by Colas Rail, were completed at the railhead in July this year following various track infrastructure improvements, allowing large-scale exportation of aggregates by rail. Operations are expected to start in the coming weeks. “Cloburn’s initial lease period allowed them to carry out their due diligence and evaluate the site’s full potential”, said Andrew Johnson, head of asset management at Hargreaves Land.

“With the capital expenditure required to bring the facility back into operation, Cloburn wanted to take a longer-term view, and we were delighted to be able to offer them the opportunity to purchase the site”, observed Johnson. “It was a pleasure throughout both transactions and fantastic to see more freight making its way back to the national rail network in light of the reduction over recent years, not to mention the inevitable reduction in carbon this will lead to over the life of the project.”

Stuart Clingan, managing director at Cloburn, took a long-term view.“This is a very positive deal for all concerned, securing the long-term future of the site and paving the way for a new phase of growth and development under Cloburn’s ownership”, he said.

The quarry has been supplying high specification track ballast since 1896. According to the owners, it is recognised as the country’s number one railway track ballast. Supplies were specified from the quarry to build the Borders Railway, the high-profile project that brought railway services back to the Scottish Borders and gave the UK its longest domestic railway reopening for over a century.