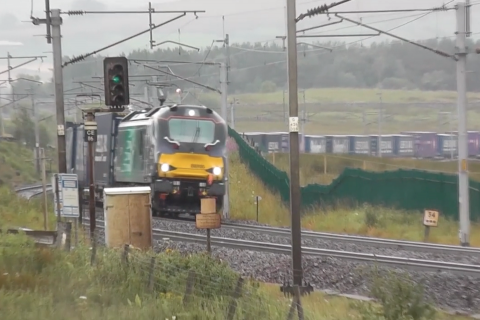 Tesco, Britain’s biggest grocery retailer says it has beaten supply chain issues by increasing its use of rail freight. The giant retailer has told markets it has not stopped yet and intends to increase its use of trains to distribute produce by almost forty per cent. Management has credited investment in rail freight for helping to keep its shelves stocked despite Britain’s heavy goods vehicle driver crisis.

The retailer has said to financial markets worldwide that it has continued to cut prices to shoppers despite commodity price increases and rising delivery costs. The familiar sight of Tesco branded intermodal trains has become a byword for resilience during the pandemic. It seems to be company policy to make those trains even more common on the British network.

In a widely distributed briefing, the Tesco chief executive, Ken Murphy, said the supermarket aimed to deliver 90,000 40-foot (2TEU) containers of goods a year to its warehouses by rail by the end of this year. Currently, the total load is at 65,000 per annum.

The announcement comes despite the company widely reported as offering lorry drivers an almost unprecedented 1,000 pound (1110 euro) golden handshake this summer. The move was an attempt to beat the chronic shortage of drivers, pre-empted by the widespread desertion from the UK by EU drivers in the wake of Brexit.

From Spain to Scotland for Christmas

Tesco is not confining rail operations to the domestic market. The retailer is already bringing five weekly trains from Spain via the Channel Tunnel. From November, there will be an additional service bring fresh produce from the Iberian peninsula to Scotland. Tesco already serves its dominant position in the Scottish Highlands with its daily trains to Inverness. Murphy added that Tesco was one of only three retailers that used a significant amount of rail freight. “This is a fantastic story from a sustainability point of view, but it has really come into its own helping our supply chain resilience,” he said.

What all this means for shoppers is more reliability at a time when supplies are proving difficult to maintain in the UK. Tesco says it has secured ten per cent more turkeys for Christmas this year and intends to deliver them alongside other produce by rail. That’s welcome news for investors and comes as a relief to shoppers, hard-pressed to find supplies for Christmas. It’s not clear how the turkeys voted.

Utter garbage, as a bulk of freight i$ treansportedby Road
ONCE AGAIN THE TRAINSPOTTER COMMUNITY HAVE GOT IT WRONG.
The Road haulage industry is not plagued by strikes or industrial action by the stranglehold of the unions. We are wasting millions of pounds on the rail network. Its out of date, too expensive and too inefficient to be effective.
Not seen too many trains in the High Street delivering goods. This statement by Tesco is total crap, trains are doomed to failure.
.

John Darraugh, the only statement that is total crap is yours, the trains can carry the freight to terminals and rail ports all over the uk, thus reducing the amount of trucks on the roads. How long and how many trucks would it take to bring the freight from not just Spain but all over the world? Trains bring them closer to their customers and then yes it’s transported by road! It is far cheaper to transport the goods by train throughout the uk than to use trucks for the whole journey!

John Durraugh’s comments are quite surprising. This country has been crying out for rall to set itself up to unburden our roads from the grip of so many HGVs. Let’s hope this is just the start of that process being able to remove a many as possible. It is the aim of government to do just this with the introduction of HS2.

I didn’t realise that RailFreight.com was part of the “trainsporting community” (whoever they may be), and am grateful for Mr Darraugh’s well-considered points.

Do I discern a slight note of sarcasm in Mr. Rickett’s opinion on Mr.Darraugh’s “well-considered points”?!
I would have thought it was obvious to everyone-perhaps with the exception of Mr.Darraugh-to get as much freight as it suitable off the road and onto rail.

Do I detect a slight note of sarcasm in Mr.Ricketts comment on Mr.Darraugh’s “well-considered points”?!
Surely it is obvious to most people-Mr.Darraugh perhaps being a notable exception-that it would be desirable to get as much freight-where suitable-off road and onto rail.

I do assume that John Darraugh’s comments are in jest. In these months of high visibility around climate change mitigation, water (canals) and rail are by far the least polluting means of transport.

The smaller chains like Co op could be using old passenger stock for transport of cages, then 1 driver could pick up from local hubs like a main city station in the evenings. That would remove hundreds of driver vacancies.
The great thing about rail is it removes the need for multiple warehouses in different regions as your not needing to worry about drivers hours anymore.