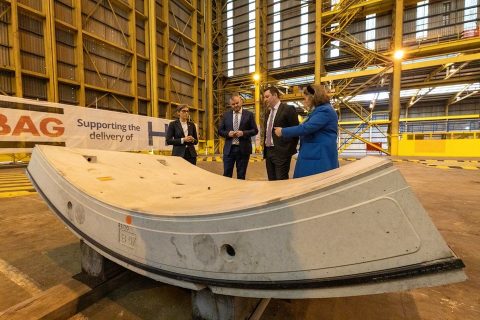 Tunnel construction materials on rail between Teesside and Thameside

An HS2 contract will bring a new factory and over 100 new jobs to Hartlepool, on Teesside in northern England. A constant stream of rail freight traffic will deliver mass-produced tunnel lining sections to London. The new factory will be constructed on an old oil-rig fabrication site at Hartlepool Dock and will be run by constructors STRABAG on land owned by PD Ports.

HS2’s Main Works Civils Contractor, Costain Skanska STRABAG joint venture (SCS JV), have awarded their second contract for the production of precast tunnel segments to STRABAG, who have announced they will be opening the facility in Hartlepool to fulfil the contract. STRABAG will be providing 36,000 segments for the twin bored tunnels under London from HS2’s new Old Oak Common station to Green Parkway running underneath Northolt. The prefabricated segments will be transferred by rail. All 36,000 units will be transported from the Hartlepool factory entirely by rail, with the first freight train delivery arriving at the Willesden Euro terminal logistics hub in April 2023.

National and local politicians call the contract award a step in the right direction for the UK government’s economic ‘levelling up’ agenda, creating new skilled jobs in the area for the project’s duration. New jobs could also be created and sustained by the additional supply chain contracts available to support the manufacture and supply of the tunnel segments. “This landmark contract to build a new factory in Hartlepool to manufacture items for HS2 shows building back better in action, giving new life to a vacant site and bringing over 100 new skilled jobs to the area”, said the HS2 Minister, Andrew Stephenson MP. “Companies across the North East are already benefiting from being part of HS2’s vast supply chain, with 400,000 supply chain contract opportunities expected on Phase One alone.”

“I’m delighted STRABAG is investing in Hartlepool to build a state-of-the-art production facility to manufacture concrete tunnel segments”, said Ben Houchen, the outspoken Tees Valley Mayor. “Not only is this significant investment going to create 100 skilled, well-paid jobs for local workers, it will also breathe new life into a vacant piece of land at PD Ports, bringing it back into productive use.”

HS2 Limited, the company formed to deliver the high-speed rail project, initially between London and Birmingham, has already pledged its support for rail freight and the wider UK economy. The company has already begun using rail freight to support tunnelling and construction operations. Additionally, it has awarded significant contracts outside the South East – such as the large award to a Somerset company for fabricating track panels.

Tunnel segment rings will be produced in Hartlepool and a sister facility in Kent. They will be loaded onto freight trains and delivered by rail to the recently opened HS2 Logistics Hub at Willesden Junction in northwest London. The tunnel segments, each weighing seven tonnes, will be then transported to the tunnel boring machine. “This is a game-changer in how we move forward in the construction industry and is a significant step towards net-zero carbon emissions in transport”, HS2’s Chief Commercial Officer, Ruth Todd.